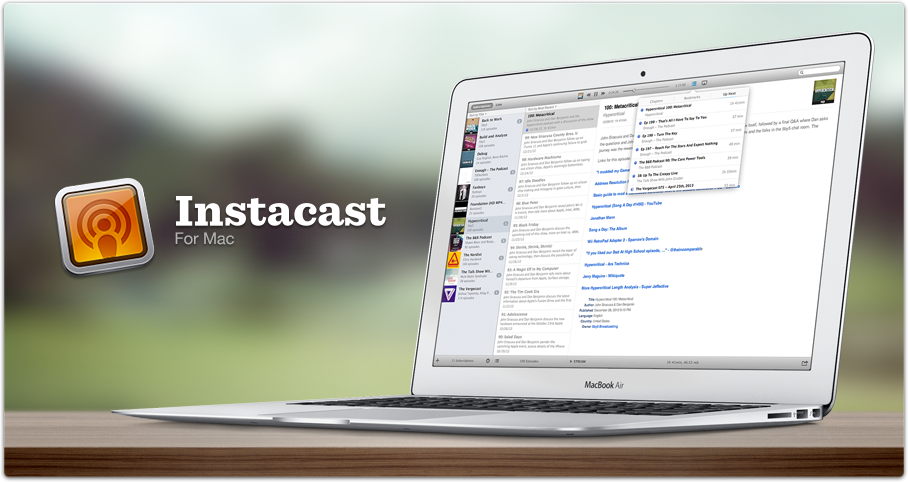 You’ve probably used the iPad and iPhone applications to listen, or in my case watch, your favorite podcasts. Vemedio, the company behind Instacast, has just pushed its Mac application live on its website.

The $14.99 (soon to be $19.99) application will be looking to clean up in the OS X podcast app category. It’ll be a large mountain to climb considering iTunes has a large podcast repository and has media playback capabilities. Oh, and it’s free.

That said, the Mac version of Instacast has some new features:

Moreover, Instacast for Mac also has a number of unique enhancements not yet found in the iOS version. For example, you are able to easily search your entire library for specific keywords, use the Up Next playback queue to quickly manage playback order, access a large amount of storage for downloading episodes and financially support shows via Flattr.

Unlike the iOS applications, however, the OS X version of Instacast does have a trial version if you’re the try-before-you-buy sort.

If you’re going to buy the application, we recommend getting on with it as soon as possible. Honestly though, we’re glade the Vemedio team has decided to charge a legitimate price for the application. It’s worth supporting indie developers, and paying a fair price for an application you may use a couple of time a day. $20.00 isn’t really all that much in the grand scheme of things.