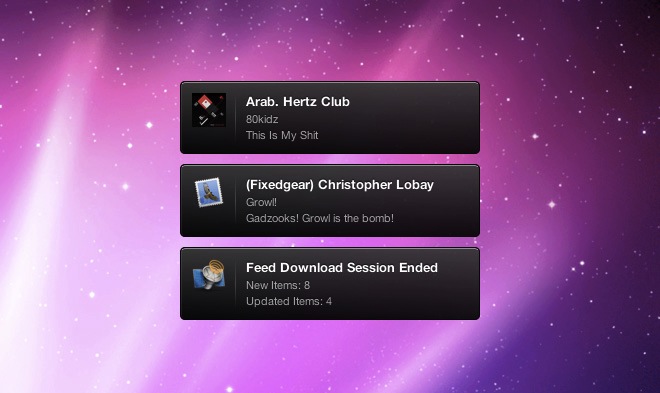 The Growl team has just announced that version 1.3 of their application will come with some pretty drastic paradigm changes. The application will be available on the Mac App Store. The Growl team hopes that the change will not only help introduce the technology to new users, but also make it easier for users to stay patched and up to date with the software bundle. We’re all for the move, especially if it is the end of the “New Update” notification that seems to pop up hourly despite being fully patched.

Introduction into the Mac App Store means a number of other changes for the application. First, Growl 1.3 will drop support for all non-Lion devices. If you’re not on Lion by the time Growl 1.3 is released, you’re out of luck. Second, a number of other growl extras are being retired because they don’t seem to fit into the Mac App Store rules. This includes GrowlMail and GrowlSafari. The Growl team doesn’t plan on any further releases for these two extras. Finally, the move to the Mac App Store also means no more installer or Sparkle maintenance for the application.

So there you have it. If you’re into Growl, and you find yourself wishing you could manage it from the Mac App Store, it looks like the team has granted your wish. There’s no mention of when 1.3 will be released on the Mac App Store, or if it has been submitted; however, the application is on its way, and hopefully it gets here sooner rather than later.

For those uninitiated with the application, Growl is a system notifier that provides you notifications when tasks have been completed or applications need your attention. For instance, the application could let you know that a file transfer has been completed, a video render has finished, or that you have received a new message from a friend. It’s pretty handy.