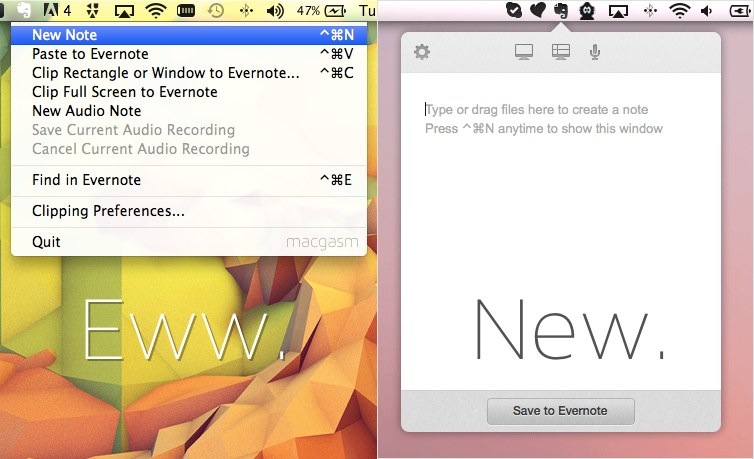 Evernote has rolled out a new update to its app that brings shiny new Quick Note functionality to the Mac app. You’ve always been able to launch a note directly with the keyboard shortcut CTRL-CMD-N, but previously it has brought the entire Evernote application to the foreground, and takes over whatever you’re working on at that particular moment. In this update, all that quick note goodness happens directly from the menu bar. It’s fantastic.

Hitting CTRL-CMD-N will open the note in the menu bar, and from there you can add images, voice notes, and grab screenshots, as well as write down whatever you need to in that particular moment. The only thing that opens is the menubar item, and whatever you were working on in that moment will stay in the foreground on your Mac. Once you’re done, hit CMD+Return and you’ll be taken back to your last used app while Evernote begins syncing your notes.

It doesn’t get much handier than that. Once you get the hang of it, there’s no going back.

While the Mac App Store update is still in queue waiting for approval, you can grab the update directly from Evernote’s servers already.

I’ve been using Evernote more and more every day. For the last eight months I’ve used it for all my writing needs, todo lists, and the organization of content for editorials and feature posts. The app is pretty much whatever you want it to be. For us, here at Macgasm, we use it as a document repository for our writing team. It’s, by far, the best solution we’ve come across.