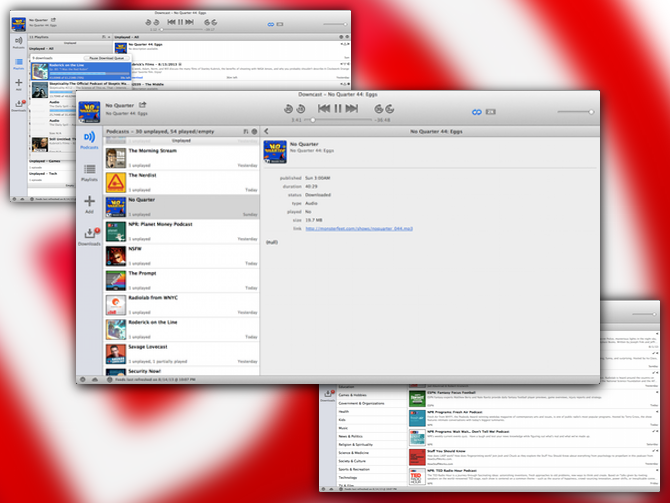 Downcast is pretty much one of the best podcast clients for iOS. I tried it and Instacast back when Apple debuted the eighth ring of hell and called it a podcasting client. Instacast was missing some pretty great features like smart playlists and iCloud sync. Downcast had a better interface, and became my default podcasting app. Problem was I didn’t always want to have my phone or iPad handy when working at my desk. When you have a desktop or laptop hooked up to speakers, why bother with earbuds? I ended up ceding my love of Downcast for a fling with Instacast when it debuted its Mac app, as it was easier to just have my podcasts at whatever machine I was using. When Downcast finally released their Mac app last week, I bought it instantly.

If you didn’t rock Downcast on iOS, you might not understand what all the fuss is about. Probably the best reason to grab Downcast are smart playlists. You can create collections of playlists with certain podcasts, allowing you to break out your podcasts into groups you can listen to, without having to create playlists using individual episodes, and they automatically refill using the criteria you set. You can also control settings podcast by podcast, adding your exceptions to the global settings podcast by podcast. The iCloud sync is pretty seamless: syncing settings, subscriptions, and episodes. Things can get a little weird if you have the app open on more than one device at a time, but I have not run into the issues of duplicate episodes I ran into with Instacast and Apple’s Podcasts App.

Downcast on the Mac is not flawless. There are still some odd bugs. The app seems to be completely helpless when syncing episodes, it will stop responding if you attempt to change settings or even start playing podcasts. The sync doesn’t last long, but it can be quite a lag if you’ve got a big subscription list. This isn’t a deal breaker, but it took me more than a few tries to figure out why I had to force quit the app. There are also some reports about issues with searching for podcasts, but I wasn’t able to replicate these.

Downcast has some compelling features that still pull it ahead of other podcast clients. The problems with the app are enough to give me pause before wholeheartedly recommending it, but I hope they’ll get fixed soon. You can grab Downcast for $9.99 on the App Store.