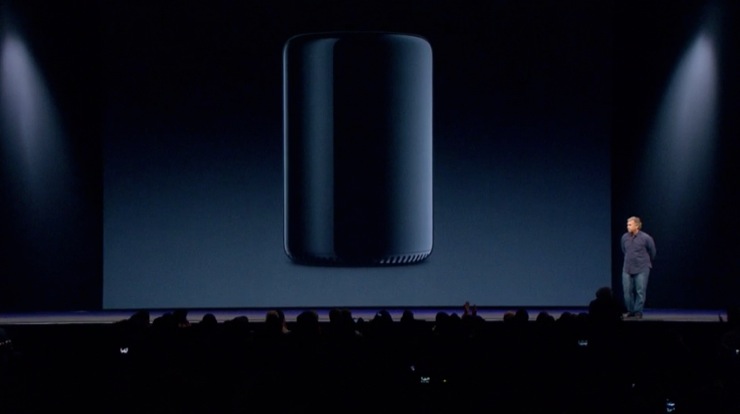 Today Apple’s Phil Schiller gave an exclusive sneak peak at the next-generation Mac Pro, which is a revolutionary and radical change from the previous generation that features the new Intel processors.

It features a major upgrade and is packed inside one eighth the volume of the previous generation Mac Pro. It’s built around a unified thermal core with state of the art technology and features a new generation 12-core Xeon processor. It also features dial AMD GPUse, six Thunderbolt 2 ports, full flash storage and 4K displays. According to Apple today, the new Mac Pro will be 2.5 times faster than the previous generation, with a total of up to seven teraflops of computing power.

Essentially, the Mac Pro is double the performance of the previous generation. It also features a new generation of Flash storage, which is two times faster than any flash ever built before in a Mac Pro. The new Mac Pro’s memory has up to 60GB/s memory bandwidth and up to 2x higher bandwidth than the current Mac Pro.

This is the first Mac Pro to support 4K displays for multiple screen and can support up to three screens at once. It also features two state-of-the-art AMD FirePro workstation-class GPU with up to 6GB of dedicated VRAM, which lets you edit full-resolutions 4K video, on top of connecting up to three 4K displays. It delivers more more performance, capabilities, and expansion than ever before.

“Video editors, musicians, graphic designers count on Mac Pro to get their work done,” Schiller said. ”We didn’t just want to make another version of the same old desktop idea that everyone had.”

The new Mac Pro will be available later this year. It was designed by engineers right in California and assembled in the U.S. by taking advantage of innovative-leading companies in Texas, Florida, Illinois, Kentucky and a dozen other states across America. A special session will be held tomorrow for WWDC developers to see more of what the new Mac Pro can do.