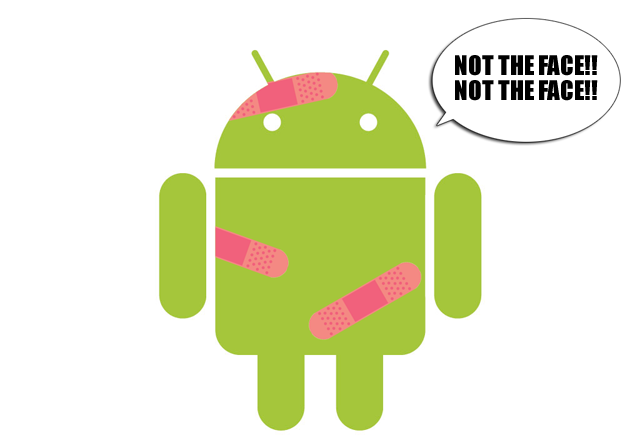 No matter what kind of wild-eyed iOS fan you may be, there’s no denying that Android’s spike goes deep into the tech industry’s soil. But can it ever be removed by the competition? Steve Jobs declared thermonuclear war on Android during his tenure as Apple’s CEO, but did not manage to keep Google’s little green robot from flowing through the veins of most of the mobile industry. The proliferation of handsets makes battle Android feel like a fist-fight against a swarm of gnats, and the rock-bottom prices for Android phones makes them hard to ignore no matter what non-Android devices have to offer. What, then, could be done to break Android’s chokehold on the tech world and open up more space for competitors?

ReadWriteWeb has some opinions about the ways in which Android can be taken out of the equation. Predictably, they cite Android’s fragmentation (the proliferation of handsets is as much a curse as it is a blessing), and how carriers are reluctant and sometimes unwilling to make operating system updates available to users. As an iOS user, it’s nearly inconceivable to picture a world in which you wouldn’t have access to your updates, but adoption of the latest version of Android (Ice Cream Sandwich) has still barely crested 4 percent of Android users (whereas more than 60 percent of iOS users are updated to the latest version).

[quote]Only a handful of desirable Ice Cream Sandwich devices are available right now. The newly released HTC One series is probably the best, but that may not last long with a new Samsung flagship (Galaxy S III) in the pipeline. AT&T did not have an Ice Cream Sandwich device on its shelves in any form until the Samsung Galaxy Note was released. Verizon was not much better, with the Android flagship Galaxy Nexus as the only decent Ice Cream Sandwich phone on the market (from any carrier) for a good portion of 2012. Simply put, for most of the year, there have not been a lot of exciting high-end Android phones. It’s hard to see how the latest version of Android can achieve mass adoption while it’s so hard to obtain. [/quote]

Pointing out fragmentation and issues with OS adoption is no new revelation for critics, but those two issues remain very serious vulnerabilities and bear repeating. One need only look at the rise of Windows in the 90s: Cheaper than the Mac and included on almost all cheap PCs when you buy them off the shelf. Again, a lot of fragmentation in that the company that made the operating system (Microsoft) was not the company that made the hardware. Instead, hundreds of PCs in thousands of configurations were in the wild, each needing their own unique code subset to have the components talk to the OS. Over time, people ended up moving away from Windows due to vulnerability to malware, insecurity, and crashing. While Android certainly is riding a very profitable wave in the mobile market, its similarities to Windows are not something Google should ignore.