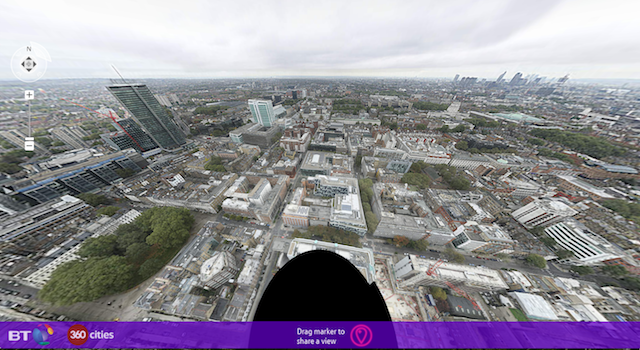 The world record for the largest panoramic photo has once again been broken. The panorama was shot by four Canon EOS 7D cameras that took 48,640 individual photos to stitch together the photo. The cameras were wielding EF 400mm f/2.8L IS II USM lenses and Extender EF 2x III teleconverters. This equals out to a 320 gigapixel panorama, which, if printed physically, would be as large as the Buckingham Palace itself. In simpler terms, the panorama is 60,000 times larger than a standard iPhone photo.

The 48,000 photos were taken atop the BT Tower in London, the English capital, directly after the London 2012 Olympic games. The photo was taken as a partnership between the BT Tower, Canon and 360Cities. Canon provided the cameras and lenses while 360Cities’ photography team did the photo work.

Steve Hercher of 360Cities said the following on the making panorama:

Software and hardware were pushed to the limits, and rain, wind and other potential stumbling blocks had to be dealt with. Our photography team of Jeffrey Martin, Tom Mills and Holger Schulze did an amazing job and not a single individual frame from the more than 48,000 planned was missed.

If you’d like to view the panorama itself, head on over to BT’s website to view the masterpiece. The panorama is interactive, so you can zoom-in and scroll around the city of London. If you’re from the London area, you can attempt to find BT’s mascot, Buzby the bird, to win an iPad, free broadband Internet, and a trip to the top of the BT Tower.