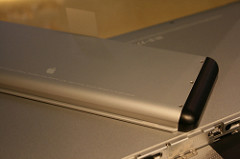 Early 2008 – Apple announces that part of the magical-thinness that comprises the MacBook Air is due to an integrated (read: non-removable) battery. Many are up in arms. How could they do this to us!?

Early 2009 – Apple announces that part of the magical-capacity of the battery of the new unibody 17″ MacBook Pro is due to an integrated (read: non-removable) battery. Many are up in arms. How could they do this to us?! Again!!!

While not unheard of, it’s definitely a trend that Apple is setting: providing an elsewhere unavailable feature at the cost of an industry standard feature that, and I know you’ll all argue with me, many (if not most) people never use. Non-removable iPhone battery (no one I know uses a second cell battery), same with the 17″ MacBook Pro, etc. You’re irritated, I get it. So let’s chat.

Let’s be honest – we’ve all gotten over Apple proprietary hardware quite easily. New things like Mini Display Port and Mini DVI, old things like the iPod dock connector, FireWire, and even terrible things like Apple Display Connector (anyone remember ADC?). The point? An integrated battery is different, not necessarily bad. It’s economical – cheaper to produce, cheaper to maintain, and provides us all with amazing battery life. While I wouldn’t expect the advertised 8 hours, a realistic 5-6 shouldn’t be impossible, and that’s truly amazing in such a device. At $179 to replace, you should have gotten your money’s worth after 3 years when your battery dies.

But this is where the problem lies – warranty and replacement. Apple’s policy on notebook batteries says that it’s under warranty for 1 year or 300 charge cycles, whichever comes first (yes, even if you have AppleCare). A charge cycle is a full charge and discharge (so if you discharge 50%, charge until full, discharge another 50% the next day, charge until full, you’ve used 1 single cycle) and for most people, 300 cycles is more than a year’s worth of use. What’s more is that these cycles are typically only 2-4 hours in length. Let’s double that, and increase the cycle capacity to 1000. That’s (effectively) 6 and a half times the amount of battery life of a last generation MBP. With this increased capacity, I expected to hear that the battery is warrantied for a full 3 years when AppleCare is purchased. Sadly, it doesn’t seem that this is the case.

Overall, I think the decision is a good one. Apple is going to be responsible for fewer wasted batteries, consumers may not need to purchase a replacement battery over the life of the product like they might now with a 300 cycle battery, and new advances in technology that are pushed upon consumers in this way help the market grow and prices drop. So while the product may not be for you, it’s definitely the right choice for Apple, and probably the right choice for most of us that are using the product daily.