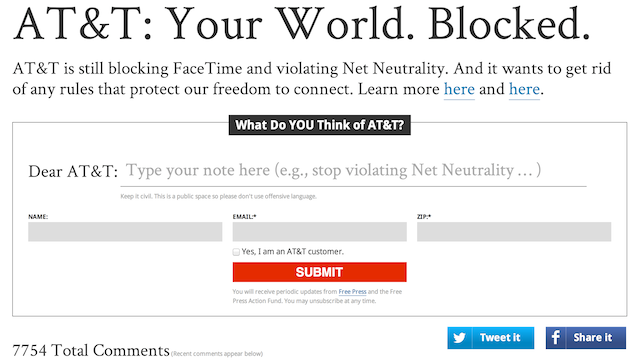 Free Press has just launched a petition against AT&T’s views and actions against the FCC’s Net Neutrality laws. An example of this would be AT&T not allowing grandfathered unlimited data plan users to use FaceTime over the company’s cellular network, though tiered data and Mobile Share plans just recently received the functionality. The petition’s headline states “AT&T: Your World. Blocked.”

Not only does the petition demand FaceTime over cellular data functionality for AT&T’s unlimited data users, it’s petitioning AT&T’s stance on Net Neutrality. The company is reportedly against any local or national law that would force the company to offer a free and open Internet to all of its customers.

We’d highly recommend signing this petition to stop AT&T’s violation of FCC Net Neutrality regulations in the United States. AT&T has been throttling and limiting its users for way too long, and it needs to stop. Because in the end, it’s our data, and we should be able to use it however we want to use it. As of now, over 7,700 individuals have signed the petition with more signatures pouring in every second. You do not have to be an AT&T user to sign and signing only requires a name, email address and ZIP code.