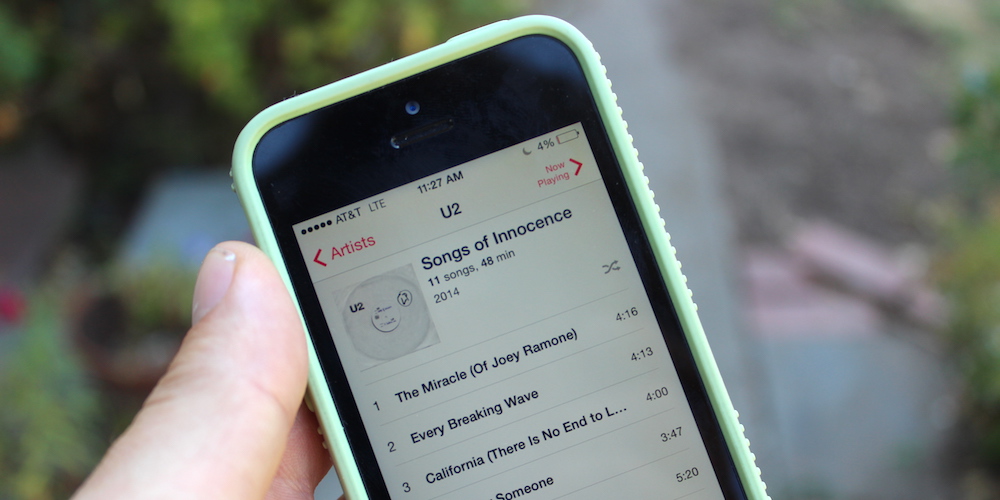 Peter Cohen over at iMore had some pretty scathing words directed at those who are upset over Apple giving all iTunes users a free copy of U2’s Songs of Innocence (via Daring Fireball):

“Let me say at the outset that I’m pretty ambivalent about U2 myself. They’ve never been one of those bands that I’ve absolutely had to have the latest album from. In fact, Songs of Innocence is the only U2 record I have in my iTunes library.

But the inordinate amount of actual anger directed at Apple and U2 over this is so disproportional to the actual event, I’ve started to wonder about the mental state of some of those complaining. It’s really been off the charts.

If you fall into that camp, let me speak very plainly: I have no sympathy for you. I have trouble thinking of a more self-indulgent, ‘first world problem’ than saying ‘I hate this free new album I’ve been given.'”

First, let me say that Cohen is right for the most part. Yes, many of the reactions to whole thing are over-the-top. Yes, you can easily hide the album from view. No, Apple is not compromising your privacy by adding a free album to your catalog of purchased music. No, your comparison to the NSA is not valid.

But people still have a right to be annoyed here.

The problem with Apple’s decision to give away Songs of Innocence is, plain and simple, that it appeared in users’ iTunes Libraries without any warning and without any indication of how the album got there.

(I know, I know, Apple sends newsletter emails. I can’t remember the last time I opened one of those.)

As I remarked on Twitter, if a random album I didn’t expect or explicitly purchase appeared in my iTunes library without any warning, first, I’d be worried that someone compromised my account. Second, I’d be annoyed that something I didn’t purchase—and didn’t want—was in my library. Third, I’d be equally annoyed that I couldn’t remove it from my account (though Apple has since rectified this).

Nobody likes to have things crammed down their throats, regardless of whether or not they saw it coming.  It’s doubly galling if you’re more cynical and see the free album as little more than a marketing campaign. Music is a very personal thing to a lot of people, and some put a lot of effort into carefully curating our music collection. There’s a reason the iPod means so much to so many people. One’s music collection is not something you go in and mess around with.

Apple could have easily avoided this whole imbroglio if they had simply offered  Songs of Innocence as a free album download and promoted it heavily through ads, email newsletters, and so on. Perhaps a future version of iTunes will have a feature to optionally alert users to offers like this, or at least provide some inline explanation of how some giveaway item appeared in their library.