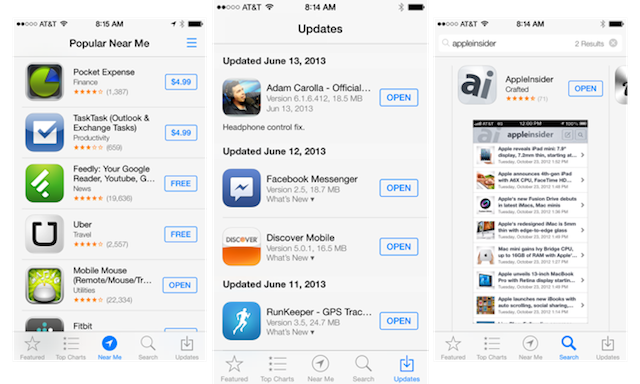 iOS 7 is definitely more than just new app icons, as you can clearly see with the new App Store tweaks and enhancements. iOS 7 doesn’t just look different from any previous iOS version, it also acts differently. We’ve already heard about how your apps will automatically update so you won’t have to see that annoying red badge on your home screen all the time, but here’s a deeper look at what else the new App Store will do for you.

Not only will you never have to manually update an app again, but discovering whole new apps will be even easier. If the feature is enabled, the App Store will automatically check for new updates and update your apps. But what if you want to see which apps are being updated and what you can expect to see with a new version? You can get all that information from the “Updates” tab inside the App Store, including when the update was installed and what changes you can expect. You can also manually install updates from there if you have not enabled your App Store to do it automatically.

The Updates tab will also includes links to content you’ve previously purchased so you can re-download any apps that were installed on other iOS devices.

You can alter the auto-update functionality in the “iTunes & App Stores” section in your iOS settings app. Updates, Apps, Music can all be enabled or disabled under the “Automatic Downloads” section. Like older versions of iOS, you’ll still be able to choose if auto-downloads are allowed to use cellular data.

Other changes have also been made to the App Store in iOS 7 to strengthen app discovery. A new tab called “Near Me” is replacing the “Genius” tab, which shows apps that are popular based on your current location by activating iOS Location Services. You’ll also see a built-in “Wish List” so that when you’re looking at a paid app, the share button in the upper right corner will also include the new “Add to Wish List” option. The Wish List button will also appear at the top right corner when looking at featured apps or browsing the top charts so you won’t forget an app that you really want. The only downside, though, is that only paid apps can be added to the App Store’s Wish List.

And finally, the overall look of the App Store Top Charts has also been altered with iOS 7, returning to a scrolling list of applications. It was only last year that Appe changed the Top Charts to scrolling from left to right.