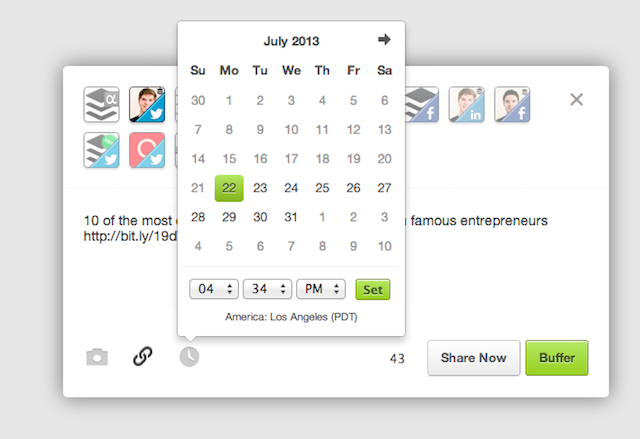 Buffer was first released two and half years ago as a one-stop-shop that let you share to social networks like Twitter, Facebook, LinkedIn, and App.net from one place at the same time. This app makes it easy to automatically schedule social media updates throughout the day so that your followers aren’t bombarded when you get a little share-happy. Initially, Buffer would schedule share times for you, but a new update introduces custom scheduling so you have more control over when something gets shared to your favorite social networks.

Since its release, Buffer has garnered 850,000 users, which is up from 600,000 users in April of this year. While not all of these users are paying customers, Buffer is still managing to rake in more than $1.5 million in annual revenue.

Buffer’s new update introduces the most requested feature: custom scheduling. Now you can decide when to share your social media updates and customize when they’ll go live.

The developers of Buffer wanted to make sure that custom scheduling is “easier and more straight forward than ever before.” To buffer your social media updates from the Buffer browser extension, Buffer website, Android app, and iOS app (which will be going live in the next few days) you just need to hit the schedule icon and choose the date and time that you want it to be posted from a mini-calendar that will pop up. You’ll know which which updates are customized by the little grey box that surrounds the time.

Keep your eyes peeled on the App Store for the Buffer update to go live. It’s already been submitted to the App Store, so it should be available in a few days.