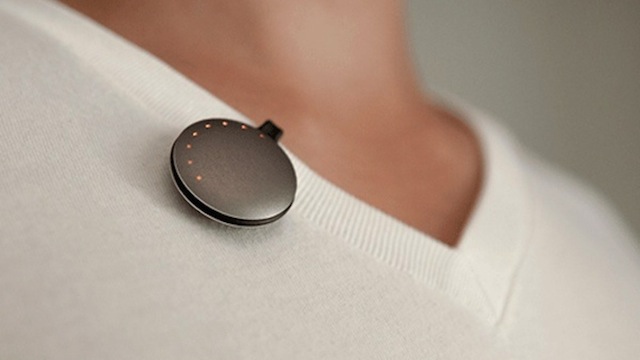 Shine, the wearable activity tracker, has launched in Apple Stores around the world today, featuring a design unique in the wearable fitness tracker arena. The device, built by Misfit, is now shipping to customers after seeing success through an Indiegogo campaign that raised more than $845,000.

Misfit was actually founded on the day that Steve Jobs died and was named as a tribute to Jobs and Apple’s mantra to “think differently.” The company was co-founded by Apple’s former CEO John Sculley, who played a big role in pushing Jobs out of the company back in the 80s. Go Figure.

The actual device is a quarter-sized fitness tracker made of matte-alumnium material and LED lighting. The small medallion requires an accessory to wear it and there are a number of different options you could use, whether it’s a wrist band you attach it to, or clipping it to your shirt or shoes.

The device comes with a compatible iPhone app that displays your activity progress, including stats like steps, calories, and distance. It also shows you an intensity graph so you can see the improvements you make and it will highlight your activity over a few days or weeks. To sync the device to the app, just place Shine on the screen.