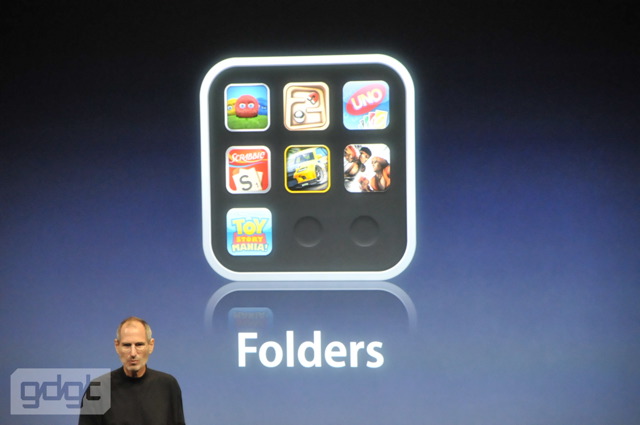 Many people have dedicated a lot of words to the lack of space for your apps. The iPhone’s UI gets pretty messy when you start maximizing your app space with hundreds of fun applications. Apple just cleaned it up for us, and with the announcement of folders functionality in OS 4.0, we’ve now got the ability to go from 180 apps to over 2,000.

Adding to the excitement is the fact that Apple’s automatically naming your groups based on the categories that the applications belong to; as well as giving you the ability to edit and create your own groups. Many people are going to be happy that they don’t have to rely on the iPhone’s Spotlight integration in order to quickly navigate to their favorite app.

Pundits from other mobile OS site’s are going to be talking about how much of this OS was stolen directly from their device. They’re probably right, but I can’t say iPhone users will really care. It makes the iPhone a little bit better, and frankly, that’s all we care about. GDGT has quoted Jobs as saying:

I’m sure he feels the same way about categories on the iPhone. Only time will tell how successful this feature will be.