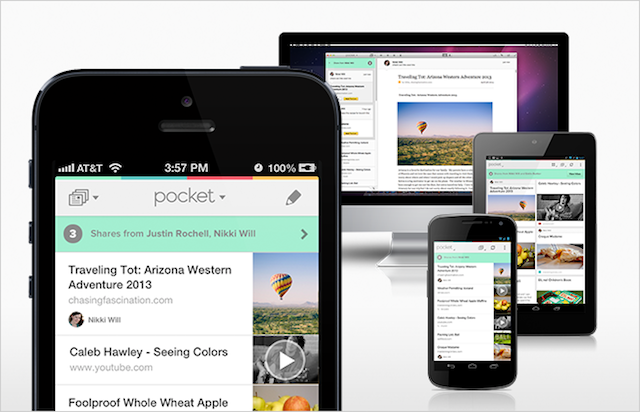 Pocket, the article saving app that lets you save and sync content to read later on any device, is about to get a whole lot friendlier with all new sharing features in a new update.

Pocket rebranded itself from Read It Later exactly one year ago, and to celebrate, it’s bringing a brand new feature to the Pocket experience in the form of sharing. The update is available for the iPhone, iPad, Android, Mac and web versions of the service. The new feature is called Send to Friend, which is a new and easy way to share with friends and family without having to leave Pocket at all.

Here’s how it works: With Send to Friend it’s easier to share important content with the people you care about. With a few taps you’ll be sharing content with friends and family, along with a comment and a highlighted quote, by sending them an email with the link. If they’re a Pocket user as well they will be notified right in the app. With Pocket’s new sharing features you can easily add shared content to your list. You’ll be able to receive shared content and once a friends sends something to you, it’ll appear in an inbox with any highlighted quotes that they really want you to see. Notifications have also been enhanced so that, in addition to an email, Pocket users can choose if they want to receive push notifications right on their phone or tablet when something is shared.

When Pocket changed its name from Read It Later a year ago, it dramatically changed the read it later experience for the better. It now has more than 35 million items per month and the service has expanded to new platforms, including Mac, Chrome and Safari, and its network of developers and publishers has grown to almost 12,000.