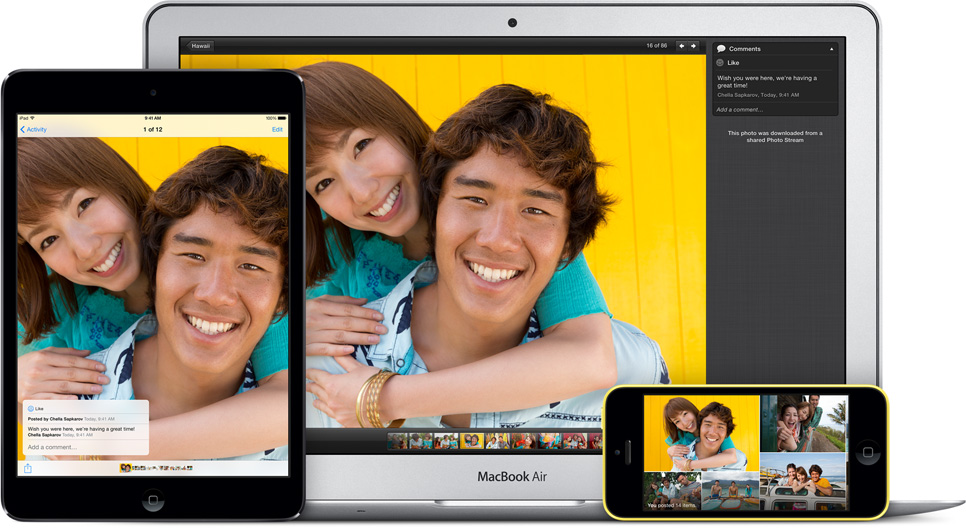 A new support document, pointed out by John Gruber, suggests that the limits to Photo Stream have been somewhat altered recently. Limits seem to now be in place to prevent photo spam. According to the document, users can  upload 1000 photos per hour, 10,000 photos per day, and 25,000 photos per month to the service, per Photo Stream.  But, does that mean that the service is now wide open and limits have been removed from the service? Not quite. Brace yourself, this gets, in the words of Gruber, “confusing as hell.”

One of the major downsides to Photo Stream at launch was that there was a limit to how many photos you could upload to a stream. Originally there was a 1000 photo limit in a stream. I, like most of you, was under the impression that the moment you uploaded image 1001 , the first image would then disappear from your stream. You would then have 30 days to connect your devices and sync images across your devices. That doesn’t seem to be true really, but it’s kinda partially true, too. Again, confusing as hell.

Here’s the key differentiator that explains exactly what Photo Stream does, straight from the mouth of Apple:

When you take a photo on an iOS device or import one from your digital camera, iCloud automatically pushes it to all your iOS devices, iPhoto or Aperture on your Mac, and the Pictures library on your PC. To conserve storage space, the photo stream on your iPhone, iPad, and iPod touch holds only your newest 1000 photos. Photos are stored for 30 days, so you have time to delete any you don’t want or save the ones you do. On your Mac, every picture from your photo stream is downloaded right to your photo library.

From the sounds of it, Photo Stream uploads exceed 1000 images in totality, but you can only count on having the last 1000 for 30 days. You better get your other devices syncing and then manually grabbing those photos before Apple banishes them into the seventh circle of iCloud hell, also known as the ring titled ‘who the hell knows where they go and when they disappear.’ If you’re hoping to drop 5000 images into a photostream this week, you better be diligent in uploading them 1000 images at a time, then backing them up manually before you dump then next 1000 photos.

There was, and still is at this point, plenty of confusion about what Photo Stream is and how it can be used by a lot of people. I know some who have begun using Photo Stream as a backup service. That’s clearly a bad idea in its current iteration. We don’t recommend that you do that. Actually, at this point we recommend that you only assume that Photo Stream is a pretty place to view images from friends and family as they stream on by, much like a river of photos. Once you cross a certain threshold your photos are gone.

Do not assume Photo Stream is saving your images for you. It’s probably not. If you think that’s bad, I don’t even know where my videos go now in Photo Stream. Videos show up in my Photo Stream folder in iOS, and they certainly show up in my Camera Roll, but they don’t sync to iPhoto in OS X, so they’re definitely not being backed up at all, which is kind of unacceptable when you consider how many people use their iPhone as their primary video camera to record milestone family events.

If there’s anything I’ve learned during this exercise of trying to figure out exactly what the heck Photo Stream is, or does, it’s that Apple needs to get its head on straight an figure this thing out.  Many people are assuming that Apple is backing these things up for them. They’re not. That fine.  But what’s not fine is the mirage that’s been set up that makes it look like things are backed up somewhere in the cloud because photos are magically appearing on one device or the next without much user intervention.

I can feel the rage building within me now that I’ve realized that the last video to make it from my phone to my MacBook Air (via iPhoto*) was from June 9th 2013. The earliest video currently on my phone is August 16, 2013, and run unbacked up until Novermber 22, 2013. There’s been a quarter of a year without a video making from my phone to my computer, and almost two months where videos are missing entirely.