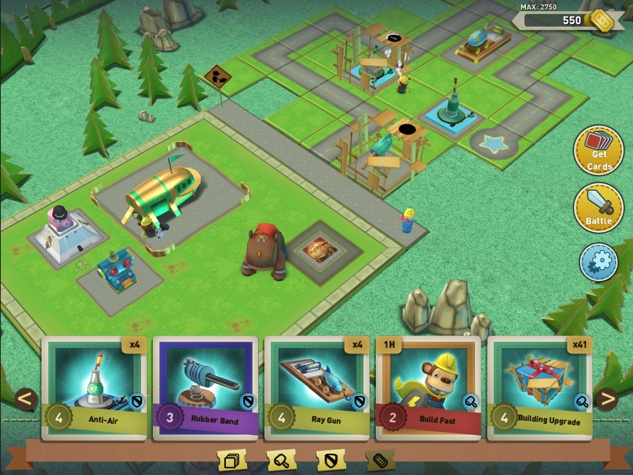 Toy Rush takes a pretty funny premise, various toys battling it out using child like weapons, and drops a layer of innovation on a genre that’s a bit over saturated. We’ve had tower defense games, and on iOS a glut of them. We’ve had games like Anomaly that put you in the attacker role. Toy Rush puts you in both roles, building your base and towers to defend it, then going out and attacking other bases.

The base side of things should be pretty familiar. You create a path that the enemy will follow, then populate that path with your needed towers. These are more childlike weapons like rubber band launchers and gum ball catapults. Your base proper has your piggy bank, your central base, and a ticket generator. The piggy bank manages the most number of tickets you can hold, and the ticket machine generates tickets.

You turn around and use those to buy cards that comprise your army of attackers. That’s where the real innovation happens. The game does have 50 single player attack missions, but what’s more fun is the possibility of asynchronous multiplayer. You can hit up your friends and attack their bases, and then it sends them the info, and allows them to respond in kind. As you beat bases you unlock new cards to grow your army. These include Super Units that are actually added to your base.

Toy Rush is due out Holiday 2013 on iOS, and is scheduled to be Free to Play. Check out their site for a trailer here.