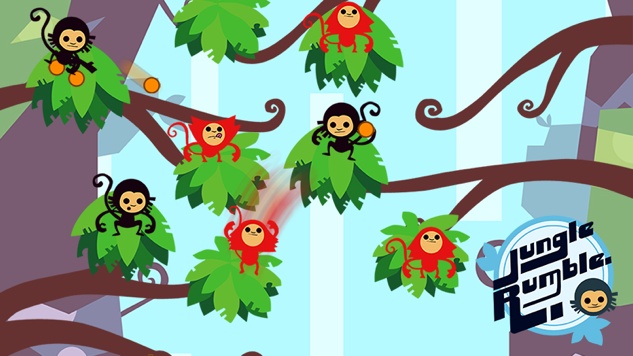 Jungle Rumble is going to scratch an itch only a few games have ever managed to reach. Combining a music/rhythm game with a story and real gameplay is a lot of fun, and the last game that managed to do it well was Patapon on PSP. Jungle Rumble has a simple four count across the top of the screen. In the first few levels you only have to move monkeys around to collect bananas. You do this by hitting the branch you’re on and the branch your want to move to as 1–2, 1–2. Your monkey then moves; you repeat until you collect the bananas, and your monkeys are happy.

The wrinkle then comes once the enemy Red Monkeys are introduced, requiring you to learn how to throw coconuts. You can only throw one space away from you, and you’ll need to move to the coconuts. Once you’ve moved to the coconuts, you’ll need to tap your space three times, and your target on the fourth count. It is a little tricky at first, especially once your targets move.
The game gets even more difficult as the screen starts to move, imposing a pretty strict time limit. The game has a story about the Red Monkeys stealing your monkeys’ food, all done in a distinctive graphics style.

Jungle Rumble should be out February 2014 on iOS, you can check out the developers’ site here.