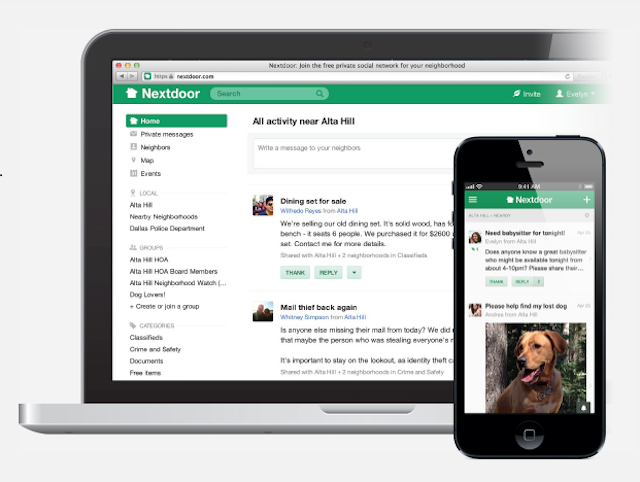 Nextdoor, a private social network for neighborhoods in the U.S. only, is going mobile with a brand new iOS app. Before now, Nextdoor was only available through the browser but a mobile app has been one of the most popular requests from users. Nextdoor is already available in more than 12,600 neighborhoods across the U.S. in over 50 states.

If you’ve never heard of Nextdoor, here’s a little background information for you. Nextdoor is like a virtual neighborhood watch for the digital era. It’s a private environment that is designed to protect you and your neighbors. Nextdoor is password protected and only real neighbors are allowed to join by verifying their address. Nextdoor can be used to keep neighborhoods safe, as well as help neighbors connect with each other by sharing local information or recommending a great babysitter or dentist or even helping someone find their dog.

Nextdoor’s iOS app is essentially the web version for mobile, so users will already be familiar with how it functions. It has a simple design where users can share updates about the goings-on of their neighborhood right in the app while posting photos using the device’s camera.

The app comes with notifications and real-time alerts, which will be great in an emergency. Alerts are delivered both as a notification and by SMS to make sure it’s seen. Cities can even pair their law enforcement agencies with Nextdoor to share information. Some cities, like San Diego and Dallas, have already done this.

The company has revealed that 12,600 neighborhoods are already using the service, but won’t give an exact number of actual users, saying only that there are “hundreds of thousands.” The number of neighborhoods alone is impressive without guessing how many individual people each one makes up.

Nextdoor’s iOS app is the first step in expanding the company globally. CEO and co-founder Nirav Tolia said the next step is to release an Android app. Nextdoor is also looking to expand its business internationally later this year. English speaking countries will reportedly be targeted first, including Canada, South Africa, and the UK.

In 2014, the company plans to expand to more countries like Brazil, Japan, and Singapore. Most of these countries are seeing a lot of citizen demand or the government is interested in bringing the service there.