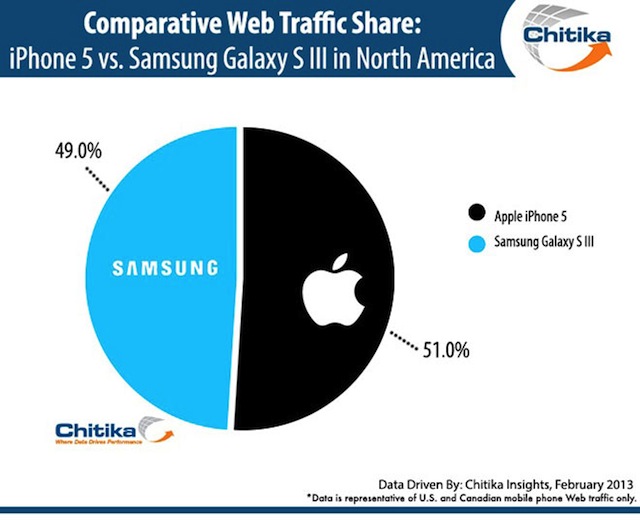 Apple’s iPhone 5 and Samsung’s Galaxy S III are almost equals in the United States smartphone market. This information comes from analytics firm Chitika Insights, which analyzed ad impressions from tens of millions of devices in the United States. The study was performed from February 1st to February 9th of this year.

The company found that when the iPhone 5 and Galaxy S III numbers are combined, the Galaxy S III takes 49.0% of the share while Apple’s iPhone 5 takes 51%. Overall, these devices took 6.3% and 6.6% of mobile web traffic. Looking at overall stats even further, Apple owns 41.5% of the smartphone web traffic while Samsung owns 20.6%. Apple shed 4.5% since the last study from Chitika Insights. Combined, Samsung and Apple own over 60% of all smartphone web traffic.

It’s worth noting that these numbers shouldn’t be taken for concrete facts on market share as the study only monitored web traffic over a select period of time. However, it does show a good estimate of usage amongst the Galaxy S III and iPhone 5 as well as other smartphones.