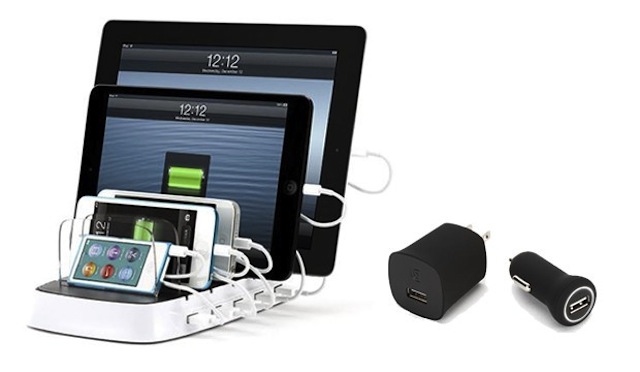 With the 2013 Consumer Electronics Show just getting started, Griffin Technology is showcasing its new power lineup, which most notably includes the PowerDock 5, a dock lets you charge five devices from one outlet with ChargeSensor technology.

With Apple continually releasing new products, I think it’s safe to say that most consumers don’t just have one Apple device anymore, especially when they all work so well together. You’ve got your iPhone for everyday use, iPad for when you’re home, an iPod shuffle when you workout, and so on. So what happens when they all seem to die around the same time? Griffin’s PowerDock 5 is a great solution to having your iDevices charging all over the house. With it you can charge up to five devices from one power outlet.

According to the official press release:

“PowerDock 5 is the “ultimate space-saving, countertop charging and storage solution for up to 5 iPads. Designed for convenience and efficiency, PowerDock 5 contains five charging bays large enough to accommodate an iPad encased in even the largest of cases […and] PowerDock 5 keeps all the users’ device cables tucked away and organized, ready for use anytime.”

Not only does it charge five devices at once, but the PowerDock 5 has built-in intelligence to know what power each device needs to charge at its optimal rate. The Griffin ChargeSensor senses what each device needs and provides the correct charging profile for each one.