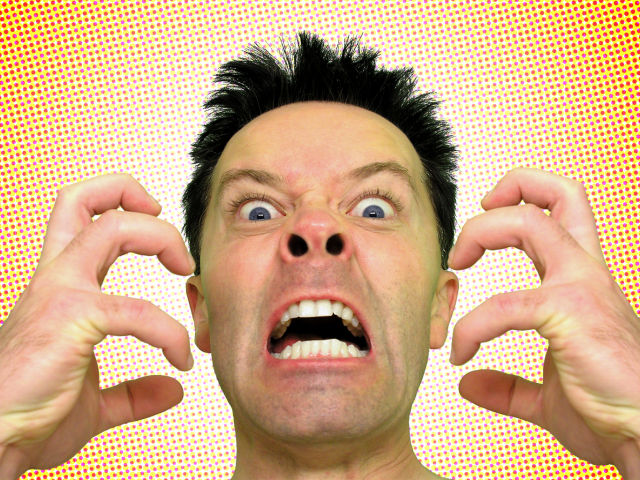 It’s the talk of the town all over the blogosphere…mainly because there’s nothing else to talk about. A bug in iOS 6 appeared at the start of the new year that affects users of the system’s Do Not Disturb feature. Normally, Do Not Disturb automatically deactivates at a set time each day, but this bug prevents that from happening, which means the user must painstakingly go into Settings, then flick the Do Not Disturb switch to the “Off” position. How dreadful.

The “DND Bug”, as it is being referred to on Twitter, is only a few days old and will automatically fix itself come January 7th, but that won’t stop the tech press from beating their collective chests and performing what I like to call, “The Hell-Block Tango”.

I shall now perform a one-man version of this number in three parts.

Every Apple flaw, from the littlest non-issue to the mildly annoying, needs a catchy title — something that looks good in a headline and equates a minor glitch to one of the biggest political scandals in history. So, what shall we call this one? “Do-Not-Disturb-pocalypse”? How about “DND-tastrophe”?

I know: “Do-Not-Disturb-gate.” Yeah, that will look great plastered across the top of the Huffington Post’s Tech page and every article Dan Lyons writes from now until the next Mayan Apocalypse.

I can picture the headlines now:

Now that we have a name in place, let’s focus on how we can leverage that name for maximum page views and retweets. The headlines are already written, but what about the content? Easy.

First, every article should start with a story about how I grew up with Apple products and have been using them for the last 20 years. Bonus points if I’ve ever waited in line for any of them.

Once my credibility as a commentator on anything Apple has been established, I need to convey a tone reminiscent of Gregory Peck in To Kill a Mockingbird. It is a tone of disappointment and fatherly condescension.

“For years, Apple was an innovative engine with an uncanny attention to detail. Under Jobs’s watch, Apple released only flawless products and something like Do-Not-Disturb-Gate never would’ve happened if he was still alive.”

I know the truth is only a Google search away, but as a tech writer with an agenda, the truth would hurt my narrative, so I’ll blissfully ignore reality and substitute my own instead.

That kind of article will be satisfactory for a site like ZDNet or CNET, but for the heavy-hitters of link-baiting like Business Insider and Gizmodo, I’ll need something even more cringe-worthy. It needs to be an article so awful, it makes people who read it think, “This man is unwell.” I know — I’ll write an open letter. No, wait — a break-up letter.

You and I have had some pretty great times together. There was that trip to Antigua we took last year where we went swimming with the dolphins. Well, I went swimming — you stayed on the boat like a big scaredy cat and took pictures. Afterwards, we went back to the hotel, I poured us some champagne, and…

Then there was this past Christmas when we went to visit my parents. They loved you, but they thought you were too skinny. They said you looked better a few years ago when you had some meat on your bones. I told them they were crazy and that I was a grown man and if I wanted to sleep with my phone in the same bed, I had a right. It didn’t matter that we weren’t married yet.

Those were all good times, but lately, you’ve been dropping the ball. First, there was the antenna fiasco where you wouldn’t let me touch you when you were naked. You said I was holding you wrong. After that, there was “Mapsgate”. You kept getting us lost even though you swore you knew where you were going. And now you won’t talk to me during the day, but you’ll keep me up all night with alerts and messages thanks to “Do-Not-Disturb-Gate”.

See? This job is so easy, any chimp with a keyboard and access to Business Insider’s CMS could do it. The best part is I don’t have to worry about editors mucking up my prose with “facts” and “context.” This is pure, unadulterated crap direct from the manufacturer.

Of course, these articles fail to convey the immediate, reactionary anger I feel the way Twitter does, so I’ll rattle off a few surly tweets to my many followers, all of whom will retweet me as willful endorsers of the man unafraid to stand up to the glossy-white monolith.

Here are some examples:

By now, the damage is done and my chances of ever receiving an invitation to an Apple event have dwindled into negative numbers. Where do I go from here?

“…I betcha you would have done the same.”

The beauty of faux Apple scandals is that when one ends, another is just a hit-piece away. Someone’s iPhone bowed while it was in his back pocket under the weight of his tuchas?

Tim Cook sold a large amount of shares for millions of dollars?

So many trivial bugs pervade Apple’s product line, there’s no end to the number of poorly researched articles one could write about the company. And this Do Not Disturb fiasco is just one of the many we’ll forget until the next “Gate” surfaces.

To paraphrase Billy Flynn toward the end of Chicago, “You’re a flash in the pan. In a few weeks, no one’s gonna give a crap about you.”