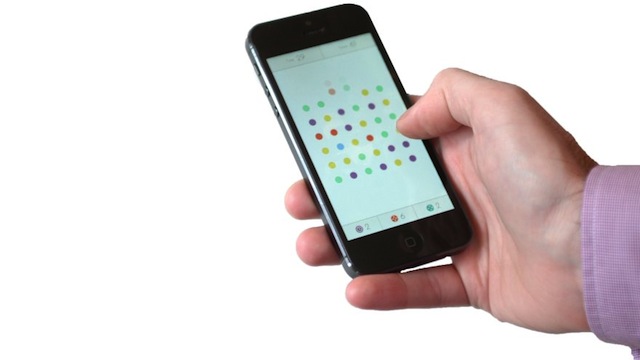 Dots, that addictive, minimally-designed, connect the dots-style game, has been updated today, bringing some pretty exciting features to an already fun game. iPad lovers can rejoice as the game now supports the larger-screened device and competitive players will be happy to know that there is now a multiplayer mode.

Dots, which was featured in our Apps of the Week just last week, has now hit 250 million game plays, which is up 150 million from only two weeks ago. Betaworks One, the team behind Dots, plans to announce this today.

With the new multiplayer mode, up to three players can play the same board by passing the iOS device between friends. Now you can really compete to see who can connect the most dots and get the highest score.

Today’s new update also adds high-contrast color options for players who are color blind. Also in the works is an untimed version of the game, as well as a possible Android version.

The new update also reduces the cost of Shrinkers to 500 dots for every five pieces of the dot-shrinking power-up. On top of that, there are a number of bug fixes for the app, including no more repeating colors dropping, there are fixes to the high score system, and you now have the ability to disconnect from Twitter and Facebook.

You can get the newly updated, iPad supportive Dots app from the App Store now for free.