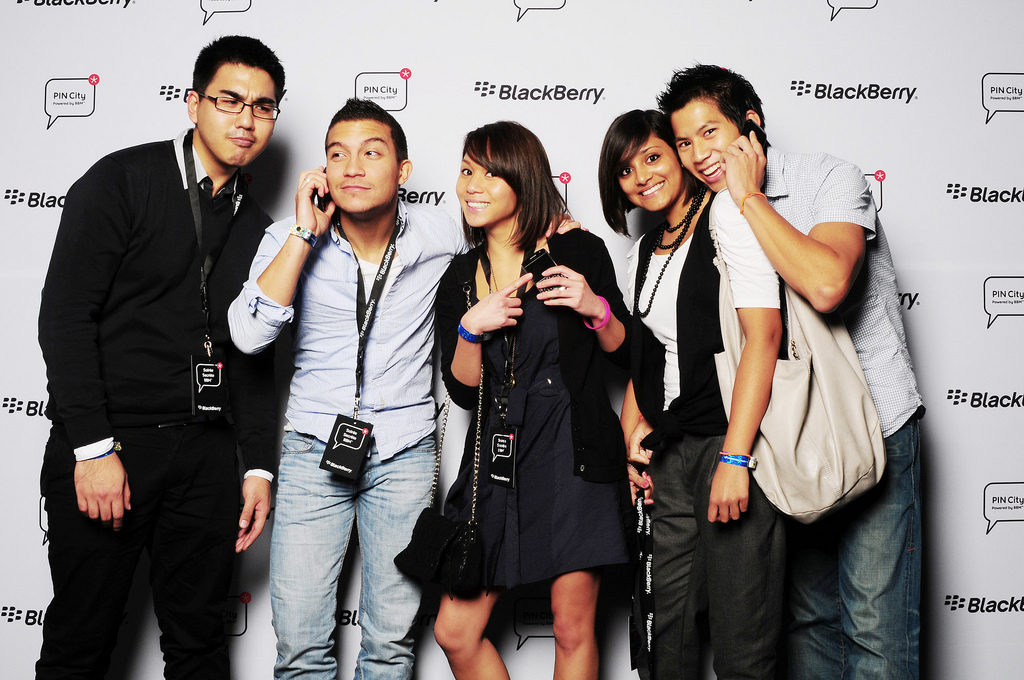 Today, BlackBerry announced that BBM on iOS and Android hit the 10 million download mark and for a first day launch, that’s pretty incredible. The question, is whether BlackBerry can grow and keep those users engaged, in order to rival WhatsApp’s 350 monthly active users, and be a significant player in the industry. We’ve played around with BBM for iOS and Android, as well as asked some friends in the biz what they think. Read on for more.

In order for any app to become a success, it has to have a clear onboarding process and a simple way to share. For a messaging app, being able to add friends, understand the app, and transform habits is crucial to the app’s success. The problem, is this process is poorly designed in both iOS and Android and doesn’t leverage any of the awesome ideas that other, similar apps use to bring people on board.

In order to add someone to your contact list, you’re provided a range of options including email, SMS, NFC and more. To test, I had a friend send me an invite via SMS. When you receive an invite to BBM via SMS, you receive the following:

When you do send the invite back, the person on the other end gets a notification to add you to their BBM. That has to be the worst friend adding experience of any messaging app I’ve ever tried.

Once you’re accepted by the other person, it’s not really clear that they’re a contact. There’s no pop up or leveraging of BlackBerry Hub to let you know that the person is now in your contact list. If you have a lot of contacts, they disappear in updates. You can go into your updates section and see if there’s an update such as “[user] is now a contact.” but that’s not clear to someone who is new to BBM. The entire onboarding process of a new BBM user is broken.

Now, how should BlackBerry have done it? There’s no need to reinvent the wheel here. Simply take the success of an app like Snapchat and duplicate it. Like most messaging apps, Snapchat tells you which of your friends have the app, so you can quickly add them as contacts, as well as it gives you a simply way to send your friends the app to download themselves. It doesn’t confuse the user with pins, links to unfamiliar pages and awkward messaging that looks like spam.

What’s really needed in this is better planning for someone who isn’t familiar with BBM. I think BlackBerry sort of took it for granted that not everyone knows how BBM works. There’s a brief tutorial at the beginning of the app, but most people I spoke with said it wasn’t really enough. The tutorial needs to give you an “ah ha!” moment and should get you started with contacts. That’s why all messaging apps help you build your contact list. If you go back to the help menu you’re simply redirected to a website that explains BBM which isn’t really helpful at all and brings you out of the app. This is a huge User Experience problem.

I still don’t get the point of BBM pins. It still seems like some legacy bullshit that’s carried over from the old BlackBerry infrastructure or something. As though the system just simply wasn’t built to handle anything other than pins. According to BlackBerry, “every BBM user has a unique PIN that maintains privacy, so users are not required to ever give out their phone number or email address to a new or casual contact.” This smells like a bad excuse because 1) maybe we do want people to know our contact info and 2) how is a pin any more secure than a fake username? The difference is a fake username is easier to remember and a pin is a ridiculous way of adding someone.

BBM me your thoughts about the new iPad. Here’s my handy pin: Iwnsoehsbwofidj2837382!,hhsjsiajakfidlelahdjdjdbejdjdakeiriuu (Tweet 1 of 12)

I asked a few of my friends to download the app and give it a shot. Generally, I wanted to know if they liked the app, if they found it easy to use, and whether the app is cool enough for them to use it regularly.

Chuck, a friend in the app business, on Android:

I personally don’t really need BBM. I downloaded the app, then waited hours for my account to load. Loading bar for hours. Takes too long to get an account. No real value add, WhatsApp is the same. I invited 10 people via text, it was easy. No one responded to my invites.

They make you download the app then wait a while to actually get and start using the account, which is silly. No real proof of any encryption added value or privacy. No point in switching from WhatsApp.

Frank, an iOS developer, on Android:

It was easy enough to set up. The first time I opened the app it showed me a screen saying that I was put in a line of users, and they would email me when I could use the app. It took about 24 hours for me to get to the front of the line, and I was able to get to the sign-in process. Beyond that, it was a matter of signing in using my BB credentials which I had made before. I can’t comment on the account creation side of the app since I got to skip it. The only major comment I have about the sign-in screen is that it feels very different from the rest of the app, almost as if it was a last-minute effort of quickly throwing buttons on a gradient display.

Once signed in, I was brought to a quick rundown of the buttons on the main screen via an overlay with arrows and text showing what does what. The app at this point is exactly like the BB10 messenger, for better or for worse. As an Android user I felt conflicted about button and menu placements since Android has different conventions for apps than BlackBerry, although I got past that within the first minute of using it.

I’ve never downloaded or used a messenger that isn’t the stock option on a phone, so as far as it competes against other Android messenger options I couldn’t say. That said, I feel like it was executed well, and has a good feature set. I think the biggest drawback I have with BBM at the moment is that I know almost no one with a BlackBerry, or anyone who has gotten past their initial line-up. I did a couple messages back-and-forth between myself and the Z10 I have for development, and everything worked well and was quick.

I didn’t really get it. I’m not sure what I’m supposed to do in the app and I didn’t really want to invite anyone to the app. I love how easy it was to add my friends on Snapchat and I wish BBM was just as easy. Why would I use this app? Does it have FaceTime or something? I don’t get it.

BBM for Android and iOS makes a lot of sense from a company perspective and they should have done this years ago. The problem is that they took BBM for BlackBerry, and exactly duplicated it on other devices, without using features that users of those smartphone platforms are used to these days. The company needs to completely overhaul the friend adding system to be modern, simple and something intuitive that people understand. If people aren’t going to have a simple time adding their friends, they won’t get any value out of the app and it will be deleted before the next update.

Here are the features BlackBerry needs to implement asap:

1) Get rid of pins.
2) Simply and update the friend adding process
3) Improve the tutorial to leave users with an “ah ha!” moment so they get it.

Once the onboarding process is solved, BlackBerry might have a product they can start monetizing and potentially breaking off to sell as a completely separate entity.