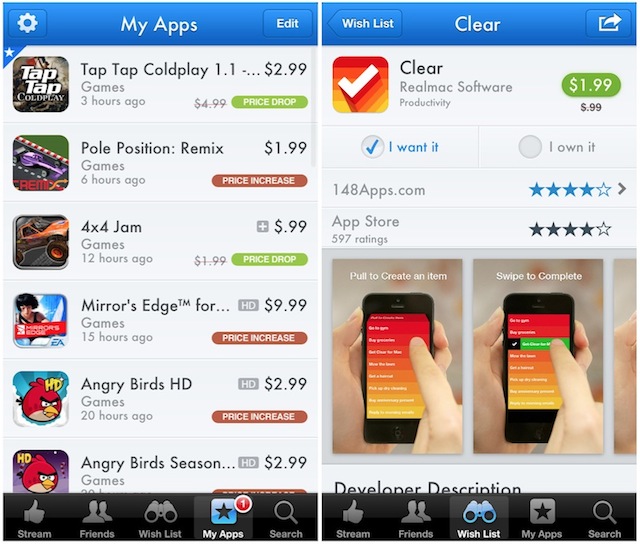 Just five months ago, the app discovery app AppShopper was pulled from the Apple Store for violating the store’s rules. Now the app is back, and has been altered just enough so it doesn’t violate any of Apple’s inane rules.

Back in December, AppShopper was pulled for violating App Store rule 2.25, which rejects all “Apps that display Apps other than your own for purchase or promotion in a manner similar to or confusing with the App Store.” AppShopper owner Arnold Kim has made some changes and recently introduced the new AppShopper Social to the App Store.

A similar situation recently happened with AppGratis, which was kicked out of the App Store for violating the same rule. Apple also recently disabled its Push Notifications as well.

AppShopper Social isn’t an update to the previous app – it’s all new, which means you can still keep the older app if its still installed on your phone.

Before you get too excited over its return, you should note the changes that it comes with. The “What’s New” and “Top 200” features are missing in this version of the app, probably because they violated the App Store regulation 2.25.

Despite missing these features, though, AppShopper social has a few new tricks up its sleeve. The most significant one is the “social discovery” element, which is designed to compliment, rather than violate, the App Store’s own app promotion policies.

AppShopper Social also has a social stream, so you can see what your friends are tracking and share the apps you’re interested in with your friends. You can maintain a friends list and integrate with Twitter. You can keep track of your wish list and apps you already own, as well as as sync with AppShopper.com.

The iTunes release notes says that there are many features to add in the future and iPad support is also in the works. You can get AppShopper Social on the App Store now for free.