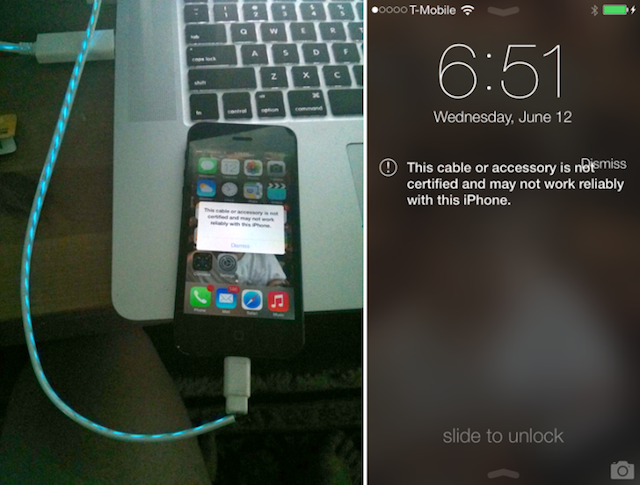 Since its debut at WWDC on Monday, developers have had a chance to test out the first beta of iOS 7 and have discovered a few new features in the software, including the ability to block unwanted calls and messages. Developers have also discovered that users will be warned when using an unauthorized Lightning cable to charge or sync the device.

Since iOS 7 is still in beta at this point and only available to developers, there’s always the chance that this message could be changed or completely removed by the time iOS 7 makes its way to the general public. For now, though, when you plug your iPhone into an unauthorized Lightning cable, you’re met with this message:

“This cable or accessory is not certified and may not work reliably with this iPhone.”

Of course, this is just a warning. Testers can just dismiss the warning and continue to use the Lightning cable. This is the first time a message like this has appeared in connection with the new Lightning connector. Since iOS 7 can detect them, it’s entirely possible that Apple could have decided to block them completely from functioning properly, but that would likely have pissed a lot of people off.