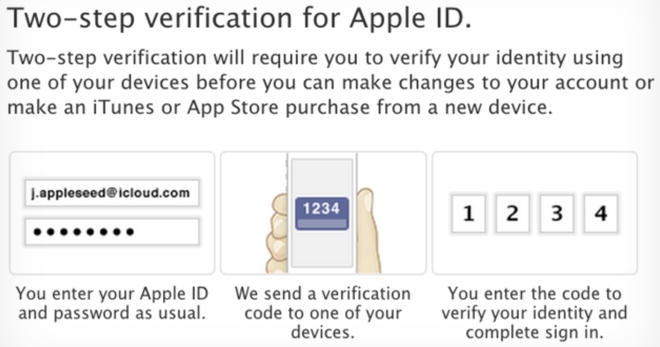 Apple has finally brought its iOS users a better form of security, as today the company released a new two-step verification process for Apple ID.

The two-step process, which Google has supported for years, requires users to have a “trusted device” such as a cell phone that Apple can send a message to in order to approve activity that occurs on one’s account. Currently, Apple’s using its two-step process to approve when a new device signs into your Apple ID for the first time.

For example, if you buy a new iPad today and try to log in with your Apple ID and have set up the two-step verification, it will first ask you to approve the attempted sign-in using one of your “trusted devices.” If you have listed your iPhone 5 as a trusted device, you will get a notification on your iPhone with a four digit number that you must then enter on your iPad to approve the login.

This way, if someone discovers your Apple ID email and password and tries to enter it on their own device, it won’t work as they won’t have one of your trusted devices to verify it.

I could see Apple also extending this feature to things such as in-app purchases down the line. While it would be somewhat of a pain to do the two-step process every time you want to buy an item in Farmville, for some parents it might beat the pain of trying to have Apple clear your bill for $1000.

Apple ID users can set up the new feature here.