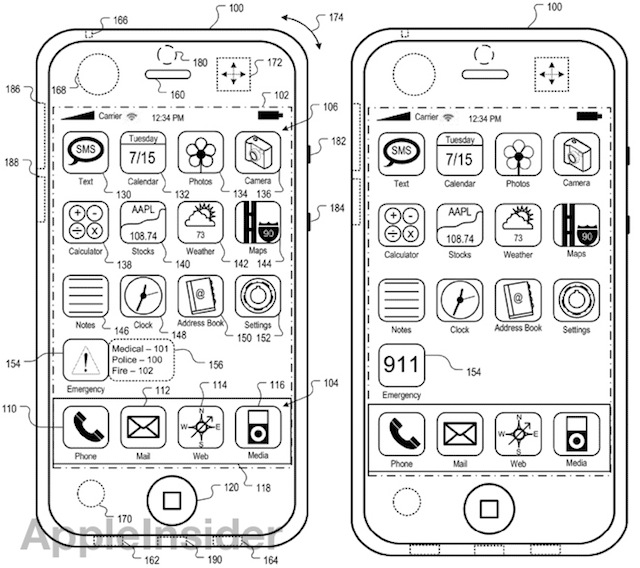 A continuation patent published by the U.S. Patent and Trademark Office entitled “Location-Based Emergency Information” details a proposed invention, in part thanks to Former Chief of iOS Scott Forstall, for a location-based emergency app for the iPhone. According to the filing:

“When a person travels abroad, emergencies can occur. For example, the person can become injured in an accident, be a victim of a crime, or lose their travel documents. In those situations, having knowledge of contact information for local emergency services or the pertinent consular services can be beneficial.”

Apple points out that getting all of the local emergency service information before traveling can take up a lot of time, especially when traveling to more than one city or country. Most people don’t usually even bother gathering this type of information.

Apple’s solution to this includes an “Emergency” app for iOS that would provide users with fast access to local medical, police, or fire assistance, based on wherever they are with their iPhone.

The information would allow users to quickly contact emergency authorities in foreign countries, where proper emergency numbers might not be known. In the U.S., it could provide direct numbers for non-emergency calls to authorities, eliminating unnecessary calls to 911.

In one illustration included in the filing, the iPhone app shows an application “drawer” that Apple explains would slide open when selected, allowing users to tap on which emergency response service they need to contact.

The continuation filing was made in September 2012, stemming from a patent that was originally filed in June 2007, about the same time the first iPhone went on sale in the U.S.

This is something we’d love to see happen sooner rather than later. It makes way too much sense to not include in a future iOS update.