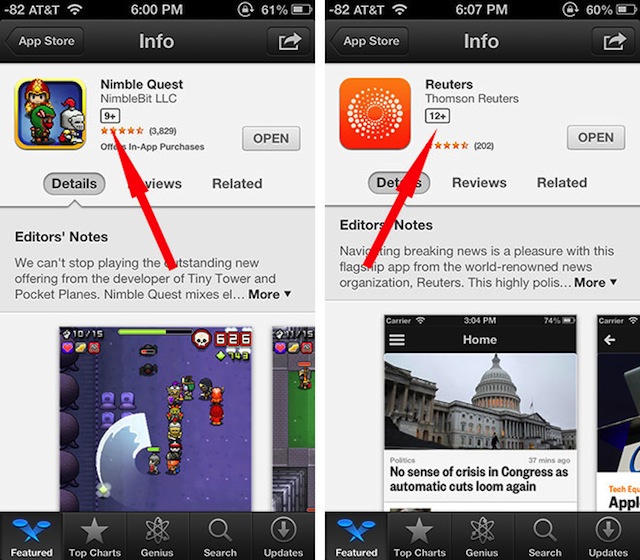 Apple has made a small change to its App Store, with the company prominently showcasing recommended age ratings for applications. A small informational box can now be seen just under the title’s developer credits.

Adding this box makes seeing the age rating for an app one of the first things that users will see when previewing or downloading an app. This could be seen as part of a push on Apple’s part to handle recent controversies and criticism from consumer groups over inappropriate content in apps and situations of excessive in-app purchases.

Earlier this year, a controversial incident brought Apple’s approval process and age rating system under question. A then-unrated video sharing app called Vine eventually received a 17+ age rating in February after it was discovered that the application featured widespread pornographic content on the service. At the time, Apple was promoting it as an App Store Editor’s Choice, but the title was quickly removed after the inappropriate content was discovered.

Just a few days before the Vine incident, Apple pulled a popular photo sharing app, 500px, from the App Store after it was discovered showing nude photos. Both how have the 17+ age rating.

More recently, Apple has been involved in lawsuits over angry parents whose children spend money without knowing it on different in-app purchases.  Apple recently settled a lawsuit with a group of parents who claimed that the App Store purchasing policy wasn’t working because it was too easy for children to unknowingly spend a large sum of money when unsupervised.

After the settlement, Apple added a line of text to the download pages of the “freemium” apps, letting consumers know that the titles support in-app purchases. This warning hasn’t yet made its way to the iOS App Store, and can only be seen on the Mac App Store.

It’ll be interesting to see how effective these changes will be, or whether Apple will have to take a different approach to eliminate situations like these in the future. Our gut tells us that Apple’s going to be addressing these things in iOS 7, which will almost certainly be announced at the company’s upcoming WWDC.