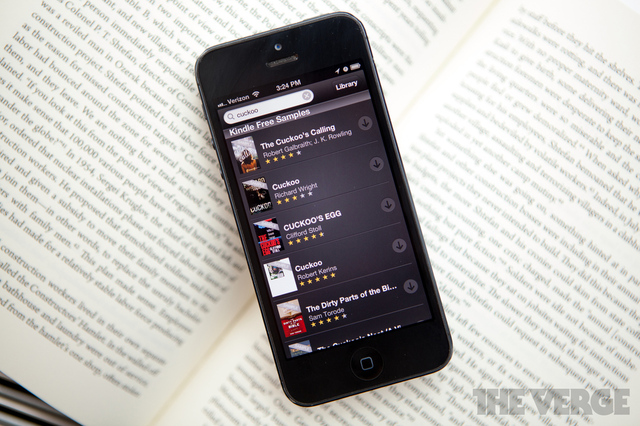 Amazon has rolled out a new update today for its Kindle app for iOS that cleverly gets around one of Apple’s App Store rules that says it gets a 30% cut from all in-app purchases. For the first time ever, you can search Amazon’s catalog of books right in the app. The App lets you browse Amazon’s online library for books with free samples available, which you can then download to read. Once you’ve finished with the book sample, a screen will pop up offering to email you a link to the book on Amazon, where you get to then purchase it, thus giving all your money to Amazon, and none to Apple.

It doesn’t specify just how many and which books will include this free sample option, but the app description says you can choose from millions of titles. Previously, Amazon launched an iPad and iPhone only HTML 5 app to avoid giving Apple its 30% cut from those wishing to make purchases from their iOS device.

The Kindle app update also now lets customers use previously purchased Dictionaries to define words in other eBooks. Dictionaries downloaded to the device will show up automatically in the selection list.

Accessibility gestures for blind and visually impaired users are included for quick reference and can be found under the FAQ section in settings, which has been translated to support all languages.

Book cover art displays quicker and more smoothly and overall bug fixes and stability improvements have been made to the Kindle app.

You can download the Kindle app for iOS for free from the App Store.