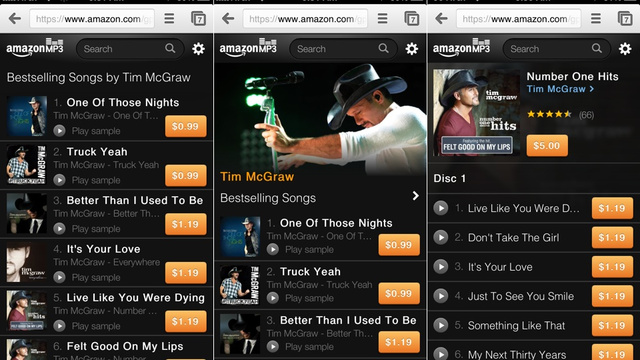 Amazon announced today that the Amazon MP3 store has now been “optimized” for the iPhone and iPod touch. Though Amazon’s iOS Cloud Player app has been around for a while, now you can actually buy music from Amazon’s MP3 Store right from your iPhone, instead of just being able to listen to the music you had stored on Amazon’s cloud servers.

Here’s what Steve Boom, the Vice President of Amazon Music, had to say:

“Since the launch of the Amazon Cloud Player app for iPhone and iPod touch, a top request from customers has been the ability to buy music from Amazon right from their devices. For the first time ever, iOS users have a way do that – now they can access Amazon’s huge catalog of music, features like personalized recommendations, deals like albums for $5, songs for $0.69, and they can buy their music once and use it everywhere.”

You can start buying music from the Amazon MP3 store today on your iPhone or iPod touch mobile browser, like Safari. Purchases are automatically saved to Amazon’s Cloud Player and can then be downloaded or played right on your iPhone, iPod touch, iPad, or any other phone or tablet.