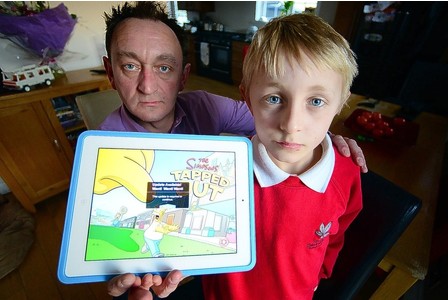 Recently we brought you the story of Danny Kitchen, a five year old British boy who spent $2550 in just 15 minutes on in-app purchases on his family’s iPad. Now the nightmare moves to the Rowland-Fry family, whose eight year old son Theo decided it was a good time to tap over to the in-app purchases section.

Theo managed to spend £980 ($1460) on The Simpsons: Tapped out. Unlike in the case of Danny Kitchen, however, where Danny went on a 15 minute spree, Theo’s purchases were spread out over a couple months. His first purchase came mid-January and he continued to make purchases until early March when his parents finally caught on.

Mr. Rowland-Fry stated, “It was only when my wife rang me and asked where all the money had gone that we found out what had happened. She got a statement and saw there were more than 100 purchases on iTunes for between £1.50 and £75, from the middle of January and the beginning of this month.”

Mr. Rowland-Fry thinks that it is far too easy for kids to make purchases on the iPad: “I appreciate children are their target audience but it is not right and there needs to be specific controls in place to stop this from happening.”

After communicating with Apple, the family was able to get a full refund on the purchases. The fact that they got a refund on purchases that happened over the span of two months makes you question what it takes to have Apple not throw your money back at you.

Mr. Rowland-Fry then tells a much scarier tale that happened to a family friend: “A friend’s little girl spent £350 on a horse game. One add-on was £69.95 for a little diamond to go in the horse’s mane.”

£69.95 for a little diamond to go in the horse’s mane…
I don’t want to live on this planet anymore.