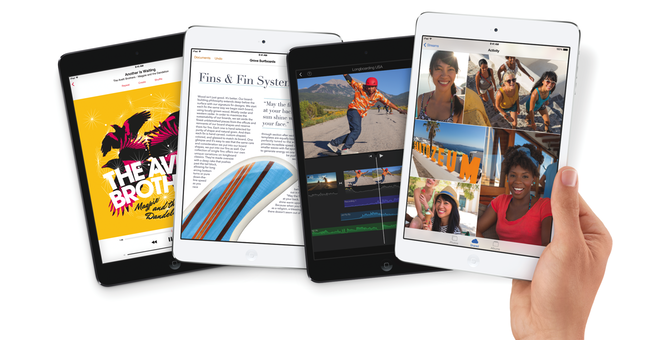 I’ve done more than my fair share of mocking other computer makers for missing the boat on tablets. It’s easy to look at the Surface and smile the kind of pitying smile you usually save for brave but useless sports teams. You can look at Nokia’s new snappily-named Lumia 2520 and be reminded of the level of success the Finns enjoyed with their netbook. And you can think of Samsung’s approach – summed up as “throwing everything at the wall and seeing what sticks” – and chuckle.

But there’s no doubt this is the year of the tablet. The market has exploded, and although Apple doesn’t have the dominant position it once had it remains the biggest player in the market.

If Apple wants things to stay that way it needs to leave as little space in its price range as possible. If there’s a gap at the low-end which competitors can exploit – a so-called “price umbrella” – there’s a good chance that the company could become “just” a very profitable niche supplier.

It would be a surprise if Tim Cook wasn’t aware of the potential danger of price umbrellas. Talking about the iPhone on a conference call in 2009, Cook said it would “make sure… we don’t leave a price umbrella for people”. And, using the strategy of keeping the previous two years’ iPhone models in the line up (and now the iPhone 5C), the company has been able to achieve this in the most affluent markets around the world.

But the iPad and iPhone are different devices, in different kinds of market. With iPhone, part of the umbrella was always closed by the subsidies paid by carriers. The list price of an iPhone 5C might be $550, but most people will pay less than $100 for one on contract, and that doesn’t leave a lot of space for the competition. Add in the “free on contract” iPhone 4S and Cook has pretty-much succeeded in his aim of removing the umbrella.

The iPad, though, is usually bought full-price, which means Apple has to work much harder to keep the price umbrella shut. Clearly, there’s no way that the company can compete with the likes of the super-cheap Hudl that British supermarket Tesco recently released, and nor would it want to. But better-quality tablets like Google’s Nexus 7 start at $229, and even with the presence of last year’s iPad mini cut to $299, that’s a window of opportunity for competitors.

There’s two things which play against Apple’s strategy here. The first is that, on paper at least, the Nexus 7 is cheaper, newer and better-specced than last year’s mini. To get a screen as good as the Nexus, you need to spend $399, which is a very big price difference indeed. If you’re a parent with two kids who want a tablet each, that price difference starts to hurt.

To get into that market, Apple needs a device which can hit $249, and preferably a new device rather than last year’s model, while maintaining its margins – the equivalent of the 5c in the current iPhone line-up. Could Apple make such a device? Eventually, I’m sure it can. But at the moment, Apple has chosen to avoid being overly aggressive in its pricing, and clearly believes it can’t do so with something is “good enough” and which preserves the kind of margins which it likes to maintain. If there’s the equivalent of the iPhone 5c in the works, we won’t see it for a while yet.