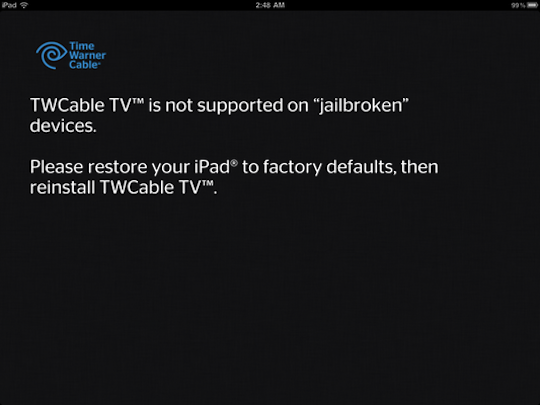 With the release of version 2.0 of its TWCable TV app, Time Warner Cable added extended program listings, an expanded channel selection and a DVR management.

The company also added jailbreak detection, routing users of jailbroken iPads to the message shown above.

This isn’t the first time app developers have warned users against jailbreaking. The popular iPad app Flipboard added a similar warning in March.

If you are in the (probably) small group of users affected by this, the guys at iPhone Download Blog have posted a fix.

While not many of us here at Macgasm jailbreak our devices these days, most of us aren’t too keen on companies interfering in what users do with their devices. If users decide to jailbreak, they should be smart enough to understand the risks associated with it, which are pretty small, given that a simple iTunes restore will un-jailbreak a device in a matter of a few minutes.

Of course, TWC may have wanted to help protect their customers’ login information. If that is true, all the company really had to do was give users a notice that moving forward was at their own risk. Blocking the app from loading seems like overkill.