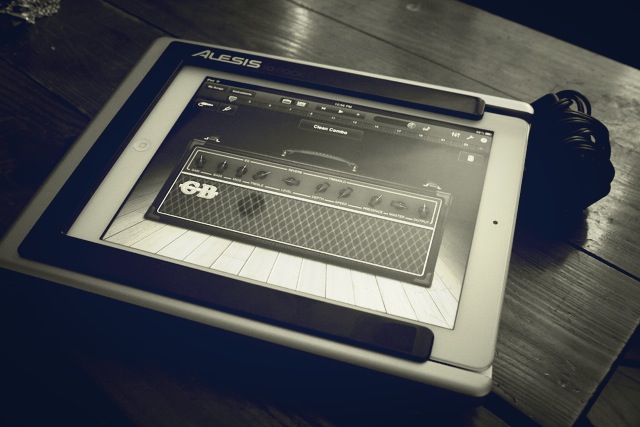 The iPad, so far, has proved to be an incredible platform for audio production and creation. Apps from audio technology heavyweights Korg, Moog, IK Multimedia, (and let’s not forget Apple), have taken the iPad form factor and delivered what might be the future of music production. Seriously, every musician should have an iPad; its the 8-track tape recorder of a new generation — but there’s a problem. How does one get high quality sound in, and high quality sound out? Enter the Alesis iO Dock.

The Alesis iO Dock is an ambitious device. It’s an iPad dock aimed at pro audio enthusiasts with just about every input and output imaginable. The dock has two combo jacks for line level and XLR input (including phantom power), midi, headphone,and even a video out.

[quote]The iO Dock was built for the real world. Whether you’re keeping it in the safety of the studio or taking it out for recording or performance use in the club or on tour, the iO Dock will not only deliver the connectivity you need for audio applications, but it also serves as a rugged, protective case for the iPad. The iO Dock completely houses the iPad on the bottom and three side surfaces. It also encases the iPad’s screen in a protective bezel on three of its four edges, further shielding the mobile computing device from the potential for damage in punishing environments.[/quote]

The promise of a device like this is incredible. Unfortunately, as I recently discovered in testing and reviewing this device, the promise of a true pro audio experience on the iPad is yet to ship from Alesis.

Sold out at almost every music shop in Toronto (including Moog audio), I found the one store in town that had the iO Dock in stock. Excited to try it out, I bought it immediately and rushed back to a friend’s flat to put it through its paces.

The problems began the moment I docked the iPad. Made of glossy, seemingly low grade plastic, the unit shipped with a spacer to make the iPad 2 fit. My second generation iPad fit into the dock well enough, but certainly not securely. I decided to use Garageband to test the dock since it offered software monitoring via its built in guitar amp emulation, which seemed like a great stress test for the dock. After some finagling to get the iPad to make the connection with the dock, Garageband finally recognized the device.

Setting up my guitar on a software monitored track, an intense crackle and hiss filled my headphones almost immediately. I made sure to recheck my connections and cables but after some basic troubleshooting I managed to reinitialize the dock by closing and reloading Garageband. For a while it worked well enough, and I managed to record an eight bar rock punk riff with lead and rhythm guitar. Then, I moved the dock. During playback, without warning, the dock lost its connection to the iPad. Again I finagled the iPad back on to the 30 pin connector so it would connect, but this time only rebooting the iPad brought the connection with the dock back to life.

To ensure I was using the dock appropriately, I hopped on the Alesis support forums, only to find a torrent of unanswered requests for support. A persistent crackle has plagued the device since Apple updated its devices to iOS 5, making it almost completely unusable on most new or up-to-date iPad devices. Alesis provided a firmware update for the dock that apparently addresses certain issues, but alas, even after installing the firmware upgrade (via connecting the iO Dock to my Macbook Air) the dock continued to give me persistent problems.

Next I tested the iO Dock with the Korg iMS-20 app, a fantastic analog synthesizer and sequencer for the iPad I use frequently for professional applications. Again the connection would drop in and out whenever the device was moved. Trying to determine what kind of interactions would trigger the dock to disconnect (to see if the issues could possibly be tolerable), I riffed on the iMS-20 onscreen keyboard exactly how I normally would and quite randomly the connection would disengage and reengage mid-use.

Further research on forums brought me no respite. Unfortunately for all of us, shoddy support plagues this peripheral in a way that is unacceptable for what ought to be, and is touted as, a pro level device. It is advertised as working with the iPad 2 and is readily sold (and sold out) in boutique music shops everywhere; however, it simply will not operate correctly with iO5 devices right now. Perhaps an update on Apple’s end or Alesis’ will amend the issues, or perhaps some users will just learn to live with its eccentric behavior. Right now though, this is not the answer to our pro audio prayers working with the iPad. I wanted to take this thing to a gig, to a rehearsal, and into the studio, but unfortunately the only place I’ll be taking it is back to the store for a full refund.