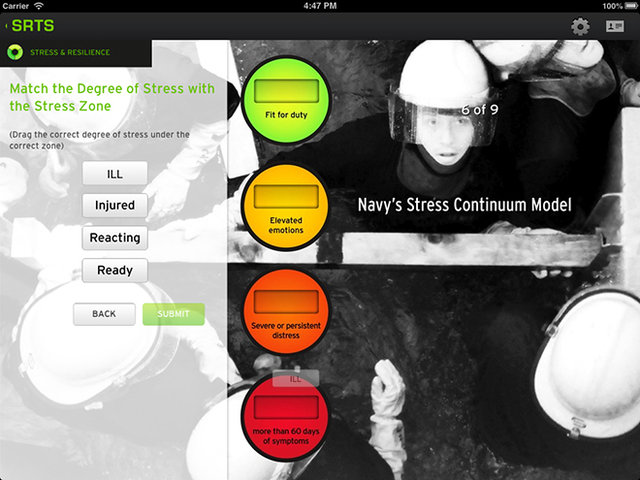 Researchers and developers for the U.S. Navy are currently hard at work on an iPad app to address one of the military’s biggest concerns: Post-Traumatic Stress Disorder (PTSD).

The app is called the Stress Resilience Training System App (SRTS), and it is designed to do just that. It uses both the iPad itself and a heart rate monitor that clips to an ear lobe. The app’s goal is to try to increase the stress resilience of sailors and marines so that when they enter stressful situations in the field, they are less likely to be hit by PTSD. “The SRTS app provides users with an easy-to-access tool that helps them build resilience toward stressful events so that when they encounter those events, the likelihood of experiencing PTSD or any other aftereffects from stress is reduced,” said Cmdr. Joseph Cohn, program officer in ONR’s Warfighter Performance Department and originator of the SRTS project.

The app has four sections to it: a “know how” section, where marines are taught about stress and resilience and how they can apply this knowledge to missions; a “techniques” section, where it teaches marines how to get into the best mental and physiological state possible; a “games” section, where they can practice the resilience strategies they’ve learned; and “review”, which tracks the user’s progress over time.

According to a February 2012 Congressional Budget Office report, 21% of all U.S. militants returning from Iraq or Afghanistan suffer from PTSD. The cost of treating the PTSD of all these returning soldiers ends up coming to roughly $1 billion.

Since the app likely won’t get a public release, you’ll have to go enlist for the Navy if you’re looking to improve your stress resilience.