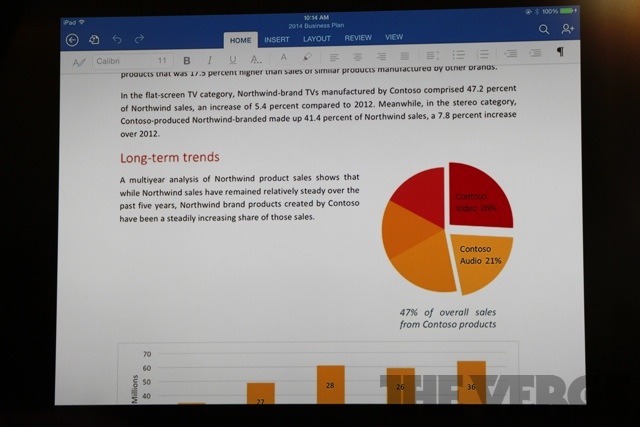 Microsoft has announced Office for iPad. Word, Excel, and PowerPoint will be available for download for free from the App Store, though using them will require an Office 365 subscription, a service that starts at $70 per year.

Office for iPad will work with Microsoft’s SkyDrive cloud service to allow for seamless editing of Office documents on-the-go. So if you start a Word document at work, and want to finish it on your iPad while riding the bus, you can do so without syncing your iPad to your Mac. Office documents will also be formatted the same on the desktop version of Office as well as the mobile version, making it even easier to to work on-the-go.

Office for iPad will also include some cool, tablet-only features like a virtual “laser pointer” for PowerPoint. When presenting with PowerPoint, the presenter can touch a spot on the screen to make the dot appear. On the Excel side of things, the Excel app for iPad includes a specialized numeric keyboard that makes it a bit easier to do spreadsheets on-the-go.

Office apps for iPad will be available for download today.

Via: PCWorld
Image Source: The Verge