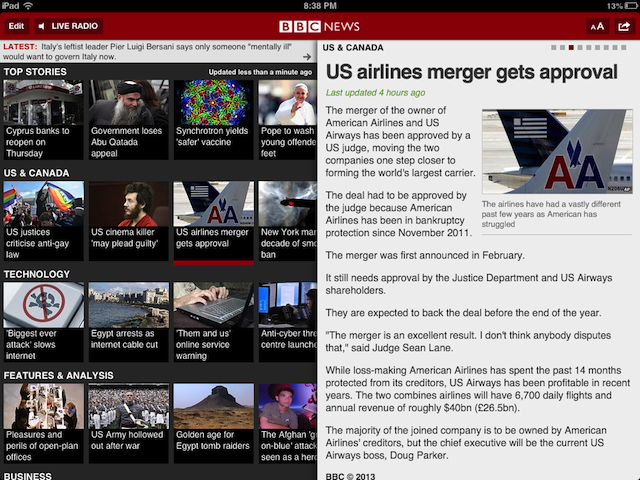 The official BBC News app has been updated to version 2.0 in the App Store. This update brings a ton of bug fixes including a fix for the annoying bug that caused duplicate stories to be displayed side-by-side.The app has also received a few user interface changes that should make for an overall better viewing experience. Pull-to-refresh has been added to the BBC News app, and it lets you refresh news stories. These stories now include larger feature images as well.

The BBC News iPad app has also received quite a makeover. The app now offers a brand new portrait mode that allows users to view more stories at once.

Other notable additions to the BBC app include improved VoiceOver integration and better integration with Facebook and Twitter for sharing of news stories.

As someone who often reads news via the BBC iPad app, these changes are very welcome. Previously, the iPad app lacked a decent portrait mode, making it a pain to read articles in certain scenarios. It’s also nice to see that the BBC’s development team finally squashed the image bug that I (and many others) have been experiencing for quite some time.

The app is free on the iOS App Store.