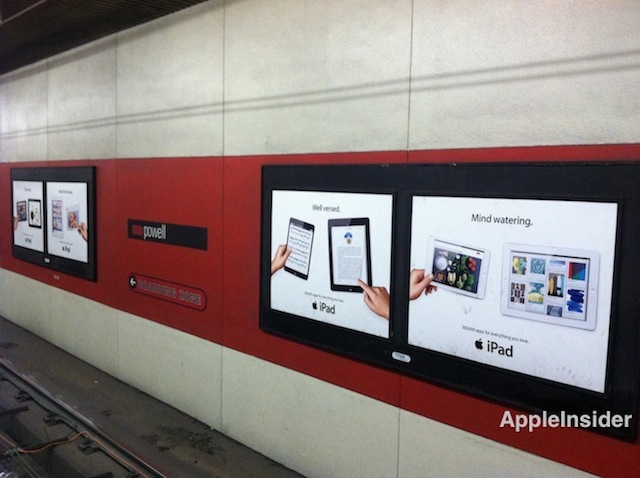 Apple has been putting up new billboard advertisements that show off the App Store’s 300,000 iPad optimized ads. The ads show both an iPad mini and a fourth-gen iPad running different apps. Above the iPads there is a small slogan that is different in every ad. For instance, the music focused ad features the “Ear Opening” slogan and two music apps. Other slogans include “Mind watering” and “Elementary”, among others.

Apple also highlights the fact that the App Store is home to over 300,000 iPad specific apps by putting “300,000 apps for everything you love” at the bottom of the advertisement. The App Store currently houses over 700,000 apps for the iPhone and iPad combined. This brings Apple far ahead of its Android and Windows 8 competitors in the tablet space.

These ads have been popping up at subway stations and billboards all over. The photos posted above show the billboards posted at a Muni stop in San Francisco’s Powell stop. We should expect these ads to pop up in other cities around the world sooner rather than later.

Update: I just came accross one of these ads at Chicago’s Clinton L stop.