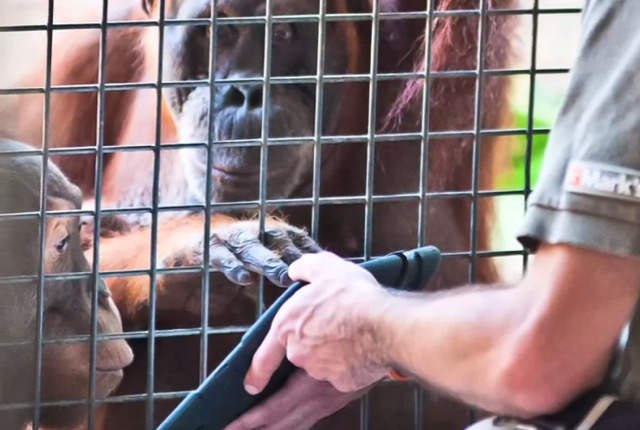 Since we’ve pretty much created an app for everything at this point, developers seem to be looking for a new demographic to “disrupt.” Instead of building apps for people, the Smithsonian Zoo has just built, and launched, an app for apes. No, we don’t mean the most vile of rumor bloggers. We’re talking actual apes. You know, the hairy, poo flinging primates? Actually, that could probably describe a couple bloggers too… Anywho…

The Smithsonian Zoo gives the apes cognitive, music, and educational based apps during their iPad time. Something tells us we’re only a short few months from an Angry Birds: Ape-shit release. Instead of flinging birds, gamers can fling poo at tourists. That game may actually exist already. It would also probably sell quite well with a certain demographic.

Back to the news. The Smithosonian Zoon has published a blog post on the program. It’s a lot of Rah, Rah, Rah, but one line stands out more than the others. It reads, “Eventually, the Zoo hopes to connect its orangutans with those at other zoos using video conferencing platforms.”

People, HAVE WE NOT LEARNED FROM PLANET OF THE APES? Come. ON. Seriously, our only saving grace is that Skype barely works still, and FaceTime isn’t entirely available over 3G on some networks. I’m starting to think we should probably keep it that way.