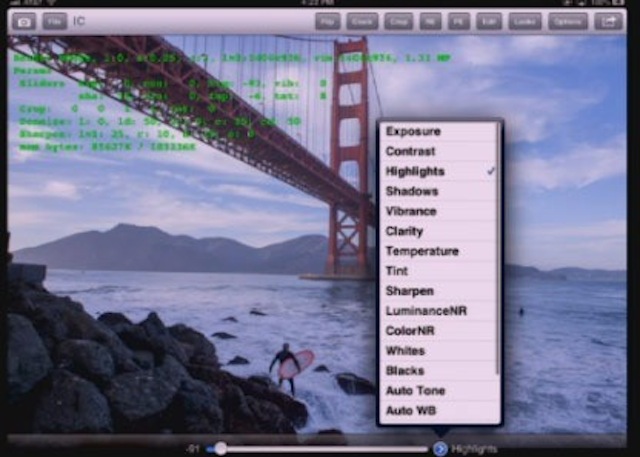 Tom Hogarty, Adobe’s group product manager for Lightroom, recently demonstrated an early version of a Lightroom-style photo editing app for iOS on Scott Kelby’s online show “The Grid.” The app, which will use cloud syncing, will be able to edit RAW images that are stored on a computer from a mobile device.

Hogarty wasn’t specific about launch dates, but did say that the app is in the process of being developed. He also discussed a list of editing controls that the prototype software has already, including exposure, contrast, highlights, shadows, vibrance, clarity, temperature, tint, sharpen, luminance noise reduction, color noise reduction, whites, blacks, auto tone, and auto white balance. Options for flipping and cropping photos were available at the top of the app.

Hogarty didn’t reveal what exactly the app would do, but did demonstrate a little of the apps features and capabilities on an iPad 2. He also discussed a couple of details about its features:

He also said he would like to see some of Lightroom’s library-module features, such as sorting photos into groups or flagging pictures you want to keep and ones you want to delete from right inside the app.

At this point, performance of the prototype app isn’t the greatest with slow and choppy points since it’s still in the beginning stages of development and the iPad 2 couldn’t handle all the software.

“We have significant performance expectations from the photography community. We take it seriously,” Hogarty said. He also said they “understand there are limitations” when it comes to mobile devices.

Guess we’ll find out if he’s being honest in the near future.