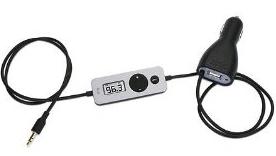 I’ve been using an FM transmitter with my iPod for a couple of years now, and my last one managed to break. So when I began looking for a new one, I wanted one that would work with my iPhone as well as my 5.5 Gen iPod with Video. So I went onto the big warehouse website known as Amazon and picked up the Griffin iTrip Universal FM Transmitter and Charger for MP3 Players. Shown below. My last iPod FM Transmitter was another Griffin product, the Griffin iTrip Auto FM Transmitter and Auto Charger for iPod. See the image below for a picture of the transmitter. While this one would’ve worked again, I wanted to future proof my purchase, since this transmitter will only work with iPods that support Firewire, meaning iPod Nano 2nd Generation, iPod with Video, and any previous version. This one would not work with either iPhone, since neither support firewire for output.

The new Griffin transmitter has a couple of helpful features. The output from the headphones does fit the first generation iPhone’s headphone jack, so you can use it with any recessed headphone jack on any device. The other good feature is that it has a USB port for charging. This allows you to use the USB charger to charge another iPod or iPhone. So this can be helpful if you have more than one device that needs charging. This also allows you to keep another car charger free to charge another item you may have, like a non-Apple phone.

The transmitter works as expected. It does transmit sound, and the good thing is that you actually have two adjustment places. Since the headphone jack is doing the outputting of the sound, you can adjust the sound directly on the iPod or iPhone. The second source for volume adjustment is the car’s stereo. So if you happen to come across a song or Podcast that is a bit too low, you can adjust one or both to get the right volume.

The newer Griffin has 4 presets that allow you to choose the stations. This can come in handy in a more urban area (like Chicago) where there might not be very many open stations, or the open stations change as you traverse the area.

So the new Griffin transmitter that I bought does work, as one would expect. However, there are a few things that do bother me. First, it seems that if it is too cold it will not work. The last Griffin FM transmitter I had never had this problem. That one would work regardless of the temperature.

The second thing that bugs me is that if you have a 64Kbps podcast and you turn up the iPod or iPhone too high the sound will become severely distorted, meaning you have to turn up the car stereo. Which leads to the third thing that is irritating.

Maybe it’s just my car, but when I have the FM transmitter on, it picks up all types of interference. For instance, the revving of the car engine is picked up. I never had this problem on the last FM transmitter, it never picked up the car engine noise, nor did it experience the fourth problem I have with the new one.

It is almost unusable with an iPhone. I say almost unusable because entirely way too much interference is picked up by this. When I use my iPhone with headphones I never hear the ‘GSM Buzz’ in my headphones. Yet, with this transmitter every little GSM buzz is picked up, which can severely interrupt podcasts and songs.

Another potential issue with this setup, of using the Universal FM Transmitter and iPhone, is that if you’re listening to a song on your iPhone and you receive a phone call, if you pull out the FM transmitter you may disconnect the caller, which can be quite annoying.

Overall, if you’re in the market for an FM transmitter and have a non-iPhone device, you may want to pick this Griffin up, however, I would recommend going elsewhere to find a better FM transmitter. Now I won’t be getting rid of this, because I do need one, but I will be looking at others when this one goes south, because it’s only a matter of time.