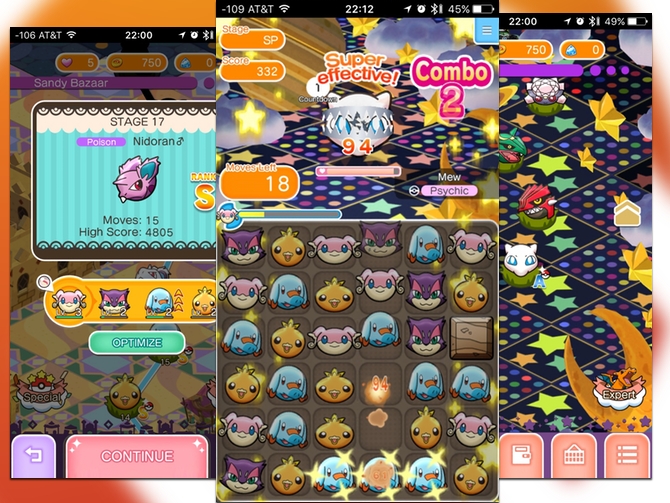 Despite Pokemon being synonymous with the Game Boy, Pokemon Shuffle is not Nintendo’s foray into mobile gaming. The puzzle game does bring some semblance of the popular franchise to iOS. The game was previously released on the 3DS, and it recasts the monster battles as a match three puzzles.

This is a pretty decent take, each of your matches is an attach with one of the four Pokemon you selected for battle. (Always make sure to pick those Pokemon that balance out your opponent for more damage.) This is free to play, so you’ll have to manage lives, as well as in game currency. The currency buys items that give you more moves, XP, or better chances of capturing Pokemon. The IAP is handled pretty well. The game makes sure to keep the come-ons at a minimum, and the lives replenish quickly.

This is an interesting premise to reframe the traditional Pokemon game. I think that I would rather have a full on RPG version, but the puzzles are fun.

What Sucks: Might alienate some Pokemon fans looking for an RPG.

Buy It?: If you’re a Pokemon fan, but you don’t mind missing some of the more complex elements, check out Pokemon Shuffle Mobile. Get it for free on the App Store.