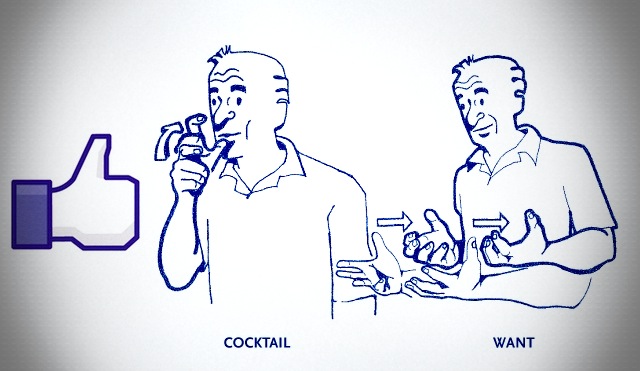 Are you ready to give your soul over to a higher power? Sorry, that seems a bit preachy. What I meant to say was, “Are you ready to tell Facebook even more about yourself?”

This Tuesday, Facebook held a press event to unveil its new Facebook Graph Search feature, which it’s slowly rolling out to the service’s one billion users in the coming months.

Facebook Graph Search allows you to execute a series of natural language queries, such as “Friends who like Star Wars and are under 25 years old”, and then use the filtered results to…um…do something. Maybe plan a movie night for people who can’t yet rent cars? I don’t know.

Regardless of its uses to users, Facebook certainly knows how it’s going to exploit use this data and it rhymes with “flonetization.” As usual, the more Facebook knows about you, the better it can target ads at your face while you surf the site. Of course, this assumes you use Facebook the way Facebook expects you to use Facebook.

Many of my Facebook friends are average users, they post politically-charged and ill-informed status updates, photos of their lunch, and play any number of games ending in “ville.” For the most part, however, they don’t take advantage of the other services Facebook offers, such as the Foursquare-esque check-in feature when they post from specific locations. They don’t go crazy “liking” stores or restaurants without otherwise being coaxed by coupons or free offers.

In other words, my friends don’t give Facebook enough information to make this feature worth the forthcoming apology about privacy settings Zuckerberg has probably drafted by now. Obviously, this is just anecdotal evidence and may not be evidence of how others view or use Facebook, but I wouldn’t be shocked to find out many users are afraid or reticent to hand over their data. Remember, tweens aren’t the only demographic there anymore — old farts like me are using it more (and I’m not even 30 yet).

Part of the problem is that Facebook doesn’t exactly make it easy for users to change their privacy settings and once they have, those same settings change again when Facebook rolls out a new update.

The other issue — and the far bigger one — is that Facebook has grown so big, it’s become untrustworthy. Like the Microsofts, Apples, and Googles that came before, Facebook has grown from a cool site to stalk your ex-girlfriends with, to “OMFG Facebook is stalking me!”

Adriana Lee wrote about this for TechnoBuffalo in August 2011:

Technically, Facebook does mention contacts syncing in at least some of their mobile terms. And technically, they do give people the ability to turn it off, which isn’t actually that hard to do — but only if (a) you know how, and (b) you can find where to do it. But good luck with all that, since any guidance from Facebook is also not very obvious. (To make this easier, we put some guidance for you below, at the bottom.)

There’s only one word that springs to mind here: Obfuscation. It’s like they’re hiding things in plain sight.

And here’s the kicker: Now that people have caught on to this, the company’s asking us to trust that it won’t do anything sneaky with the data — the same data that too many people didn’t even realize they were sharing.

Facebook has depended on its labyrinth of settings and its lack of granularity to — if not confuse its users — make it increasingly difficult for them to hide their information from prying eyes.

Compounded upon the lack of trust is the increasing irrelevance of “liking” brands and celebrities. When Facebook first started, we simply typed out comma-separated lists of bands, books, movies, stores, and other ephemera because it was all we could do to identify ourselves. We didn’t have “pages” for Amazon or Visa. There was no Bubble Witch Saga to distract us from our daily lives. In my day, we had status updates and profile pictures and we liked it. Not like kids today, with their newfangled skinny jeans and Instawhatsits. When I was a kid, all my pictures had lens flares because I was a terrible photographer. Now I can upload a picture that looks like crap because I wanted it to look that way.

Sorry, I blacked out for a minute there. Where was I?

Oh, right. We don’t have to adorn our profiles with numerous “likes” anymore. That’s not how we personalize our “brands” (oh, that word) on Facebook. We do it by sharing photos and links to articles we’ve read. We tell the world what’s making us sad and then click on an ad for a depression clinic under our timeline. Who we are on Facebook is defined less by what we like and more by what we share. How does this factor into the Graph Search? If we’re “liking” less — if we’re not taking the time to visit a bar’s Facebook page and leave a review — then how useful will a search like, “Bars nearby that my friends liked,” be? Don’t we typically use Yelp for that sort of thing?

But, perhaps I’m not seeing the “big picture” here. Maybe something like Facebook Graph Search will nudge us to share more, to interact with Facebook more often and on a deeper level. This new feature could end up being the “killer app” Facebook needed to remain popular while so many other services are vying for our attention. And from a technical standpoint, this is something I’d love to see spread across to all sorts of websites like Amazon and Netflix.

“Which movies starring Humphrey Bogart do I not own on Blu-Ray?”

“Which of my friends had the industrial-size barrel of personal lubricant on their Wishlists?”

Amused, I posted it to Facebook with the line “A 55-gallon drum of lube on Amazon. For Valentine’s Day. And every day. For the rest of your life.” And then I went on with my life.

A week later, a friend posts a screen capture and tells me that my post has been showing up next to his news feed as a sponsored story, meaning Amazon is paying Facebook to highlight my link to a giant tub of personal lubricant.

Other people start reporting that they’re seeing it, too. A fellow roller derby referee. A former employee of a magazine I still write for. My co-worker’s wife. They’re not seeing it just once, but regularly. Said one friend: “It has shown up as one on mine every single time I log in.”

Facebook: Bringing us closer together, one slimy handshake at a time.