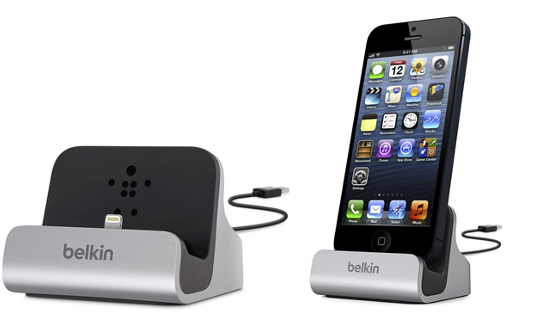 If you’re still bummed that Apple hasn’t made a Lightning-enabled dock for your shiny new iPhone 5, the folks at Belkin have you covered. The company has recently released a new dock that is compatible with the iPhone 5 and iPod touch 5th Gen. The dock goes under the name “Charge + Sync Dock” and can be used to sync your iPhone with your Mac while presenting your phone in style.

The Charge + Sync Dock has a beautiful design; in fact, I think it looks better than Apple’s own Universal Dock for pre-Lightning devices. Belkin’s dock has a plated-aluminum finish and will match your iMac or Mac mini perfectly. The inside of the device is colored black and looks pretty sleek.

As far as connectivity goes, you can connect your dock to your Mac with the included 4-foot USB to Lightning cable, which is permanently seated in the dock. The dock is powered by your Mac and doesn’t require any additional power.

The Charge + Sync dock is available for shipment now and can be purchased via Belkin’s website. The dock will run you a pretty $39.99. Belkin also offers a cheaper version of the dock, which retails for $29.99, but it doesn’t include a Lightning cable (you’ll have to bring your own). However, the lower end model does have a built-in audio jack that can be used for connecting your iPod or iPhone to a stereo.