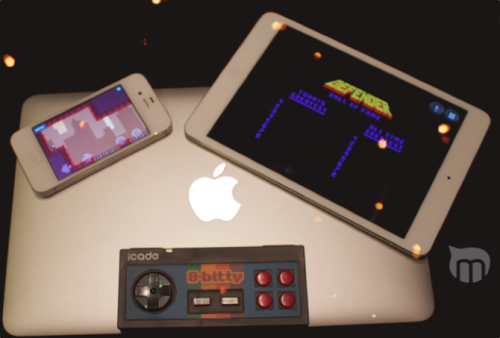 This week we have a couple of platformers from each side of the spectrum. The first is an arty game that plays on the dark nature of death in video games; the second game has gorgeous graphics and a unique storyline.  We also have another art game, this one a noir mixture of stealth and arcade games, and a rhythm game based on primate combat. Finally, we’ve got a Sci-fi game that artfully mixes genres. Sometimes You Die sounds like an Industrial band from the 90’s, but it is in fact an artsy platformer for iOS. Your character is a chevron, “>” to be exact, and you move through a black and white cave with writing in the background. Each stage has a phrase highlighted, questioning the nature of the game. The hook to Sometimes You Die is that title is literal. When you die, your character becomes a dead box blocking the obstacle that took you out. You can then crawl over the corpse to advance. Repeat as necessary until you reach the end of the game. All in all you can play the entire game in about a half hour, but after you finish the game you unlock the ability to flip the screen and walk along the ceiling.

You’ll can also unlock bonus levels that are much more difficult. This game is definitely in the arty camp. It’d have to be, any realism would make the idea of crawling over the corpses of your dead clones pretty ghastly. The game is really short too, you can clear this in about a half hour. That doesn’t mean this game is bad, it’s about the right length for its chosen aesthetics. The bonus levels add some length but are exceedingly difficult.

What Sucks: Short, specific aesthetic may not be for everyone.

Buy it?: Fans of art games or interesting platformers should checkout Sometimes You Die. Grab it on the App Store for $1.99. Platformers seem to be getting quite a bit of a renaissance on mobile. Leo’s Fortune isn’t an arty take on platforming like Sometimes You Die. This game is a lush and colorful game starring a blue puffball with a mustache. Leo’s vast fortune was stolen, and he suspects someone in his family. The thief leaves behind a trail of coins that Leo follows from level to level. The levels are themed around Leo’s siblings, like a Naval themed level focused around Leo’s brother who lost his beloved boat. Each level has three challenge stars: collecting all the coins, not dying, and time. As you collect the stars, they unlock bonus levels.

The game control system is very simply. You press to the left or right with your left hand, and then you swipe up or down with your right hand to jump or dive. For the most part, the controls are smooth and intuitive. There are a few places where the timing is tricky, and it doesn’t work out. Usually you’ll just have to try a few times before everything lines up.

What Sucks: Game might be a bit cutesy for some players.

Buy it?: Fans of classic platformers should grab Leo’s Fortune. It is $4.99 on the App Store. Being able to spot where the guards are going to look next is an excellent skill for a burglar. It’s also the premise of the noir stealth game, Third Eye Crime. This indie title has a pretty vague story about the perfect heist, but most of its charm is in the game play. You start out at one end of the level with guards searching for you. You drag your finger across the stage, trying to avoid the guards. You have the advantage as you can see where the guard is heading. Each stage has bonuses for completing it without being seen, or beating time goals. These add some additional challenges to the game.

I really like the evolving nature of stealth on mobile. Taking a genre once steeped in halve doses of drama, and giving it an arcade makeover is genius. Most stealth games were always just action puzzlers at their core, this just takes away the pretense. The art is stylistic, which may turn some people off; however, I feel that it gives the game a really distinct look. It reminds me a bit of Sam Keith’s art style. Third Eye Crime does a lot to stand out from the crowd, and fortunately it does all of it well. The only real complaint to be had with the game is the fact the powers you can use to unlock some of the challenges are in-app purchase bait. If you need more money, just ask me for it. I would have paid 5 or 10 bucks for this game, but I’m not going to pay for ten bucks to have access to in-game objects.

What Sucks: Art style, while cool and distinctive, isn’t for people looking for realism. In-app purchases in a paid game.

Buy it?: Fans of unique indy titles, or stealth fans with an open mind, need to check out Third Eye Crime. It is $2.99 on the App Store. I was excited to play Jungle Rumble since seeing it at PAX last summer. It wears the influence of Patapon on its lapel, combining a rhythm game with combat. The game’s story of cute cartoon monkeys going to war with red cartoon monkeys, using coconut munitions while hopping in time with the beat from branch to branch, also owes a bit of debt to Patapon. It’s your job to guide the monkeys as the great spirit of the forest. The drums appear as a four count at the top and you’ll need to tap out patterns to move and attack alternately. As you get more accurate you can move the monkeys as a group, letting you solve levels quickly. If you mess up you’ll be greeted with red x’s. Fail too many times and your monkeys starve.

The biggest complaint with this game is that each level is actually multiple levels strung together. The problem is that if you quit the level you have to start over from the beginning regardless of the progress you made. Each level is rated with a medal based on how well you do in terms of time and survival, thankfully quitting a set preserves your medals. Other than that, this game is a good mixture of fun storytelling with a good gameplay hook. The rhythm game aspect is easy to pick up,but it stays challenging. Trying to decide strategy in stages while maintaining a four count will make you realize why drummers are so crazy.

What Sucks: Level setup makes it hard to play casually.

Buy it?: This sort of genre mixing is going to appeal to fans of indie games, and rhythm game fans will like Jungle Rumble’s additional depth. Grab it on the App Store for $3.99. Very few sci-fi games remind you of exactly how dangerous space can be. FTL hopes to remind you even with faster-than-light travel, robots, aliens, and everything needed to travel interstellar distances, you’re still probably going to die. Be it asteroid strikes that take out life support, pirates destroying your engines, or the rebels blasting your hull to bits, you’re going to die. More accurately, your crew is going to die. They’re going to end up suffocating while furiously trying to repair a hull breach, or bring vaporized by a pirate boarding party. You endure all this gruesome misadventure in an attempt to deliver information to the Federation, hopefully helping them stave off the Rebels. The Rebel fleet chases you from sector to sector, and if you don’t stay ahead, they’ll also kill your crew.

FTL, despite all the dying, is a fun game. Taking the format of a roguelike and applying it to a space sim was ingenious. Every time you play, you have a new randomized set of systems and sectors. As you play, you’re given a set of missions that unlock new ship types and layouts. The game has a simple art style, but that makes it easy to manage a pretty complex game. Each crew member can manage a single system at a time, but you’ll need to be ready to move them to a damaged system at a moment’s notice. There are stores where you can repair and upgrade your ships, and you can get new crew members as well. You will also need to upgrade your ship’s internal systems to allow you to add more weapons or probes.

What’s Good: Good mixture of genres, easy to use interface.

What Sucks: Difficulty could be frustrating for some players.

Buy it?: Sci-fi fans looking for a unique take on the genre should play FTL. Grab it on the App Store for $9.99.