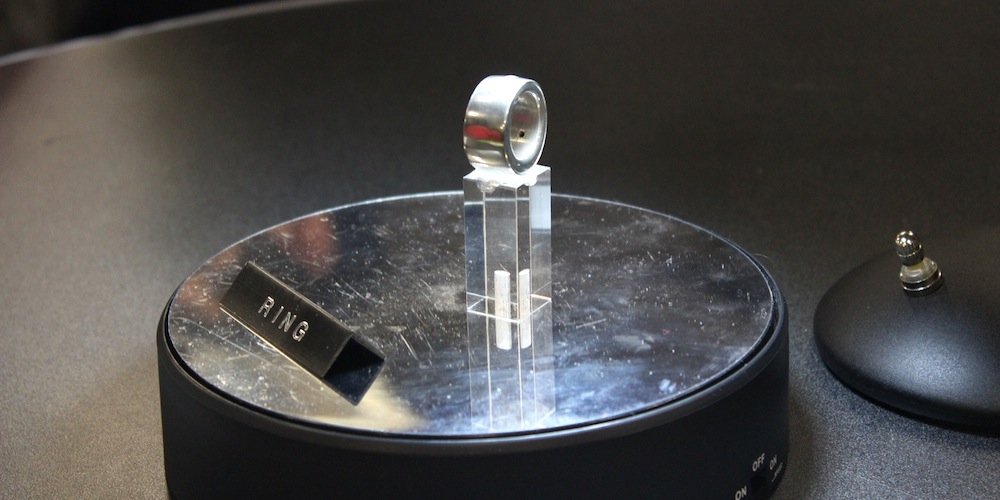 Some products seem to be bait to get bloggers to work pop culture references into their articles, and the Ring from Logbar is one of them. And its makers want you to make it your precious.

Joking aside, the Ring, which is on show at Macworld/iWorld 2014, is an input device that you wear. At first glance, it looks like it’s just a piece of bling, but inside are motion sensors and a Bluetooth module, which allow you to use the Ring as a gesture-control device for devices like your smartphone, smartwatch, and Google Glass.

The Ring slips onto your index finger, and when you want to use it, you simply tap the touch sensor located on the side of the Ring and start tracing gestures in the air. Since the Ring relies on Bluetooth to communicate with your gear, you don’t need to worry about line-of-sight issues like you would with an radio-controlled device. For now, you have to use a specialized app with the Ring, but Logbar says it will provide a development kit so other developers can provide Ring support in their apps.

Tracing letters and shapes in the air might seem like the sort of thing that would get you weird looks, but the Ring might be useful for using devices with small screens—such as smartwatches or future wearable tech—as well as for presentations. Imagine, if you will, running a presentation with a swipe of your finger instead of fumbling with clumsy remote controls.

It’s a new and novel take on wearable tech—an emerging field where most hardware makers are focusing on stuff like smartwatches and fitness trackers—and it’ll be interesting to see if maybe this is the direction wearable tech will ultimately go in.

If you want to learn more about the Ring—or if you want one for yourself—check out its Kickstarter project page. But hurry—you only have seven days left to back it.