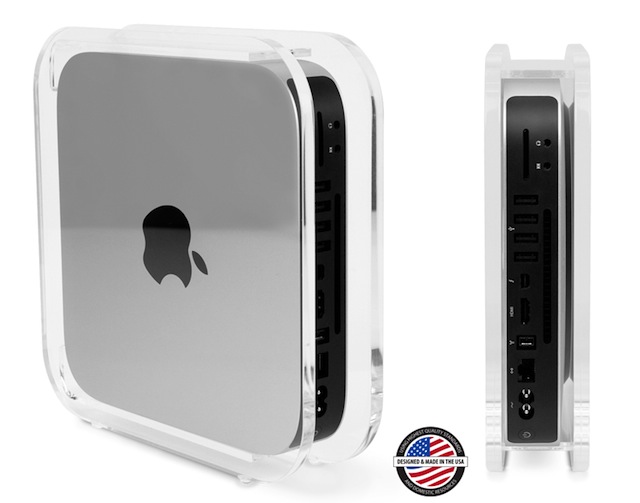 If you wanted a PowerMac G4 Cube back in the day, but are stuck with a current-generation Mac mini, don’t fret. A company by the name of Newer Technology has released the NuCube, a vertical stand for the Mac mini. The NuCube stand is designed to make your Mac mini look like the PowerMac Cube by using transparent plastic. The bottom of the stand is made out of a high-quality non-skid rubber to ensure your Mac won’t topple over when your desk is bumped.

Not only does the NuCube make your Mac mini look sexy, it provides a ton of added functionality. For starters, since your Mini is now elevated, Newer Technology claims that your Mac mini will receive better airflow, allowing your Mac to run cooler. The NuCube also saves desk space and offers easier access to rear I/O ports due to its vertical form factor.

The PowerMac G4 cube was released in July of 2000 and later discontinued in July of 2001, it featured CPU options of 450MHz and 500MHz and started at a whopping $1799. Though the computer was well hyped before release due to its beautiful design, the computer ended up being a flop for Apple due to the fact that a standard PowerMac G4 of comparable specs was available for $200 cheaper.