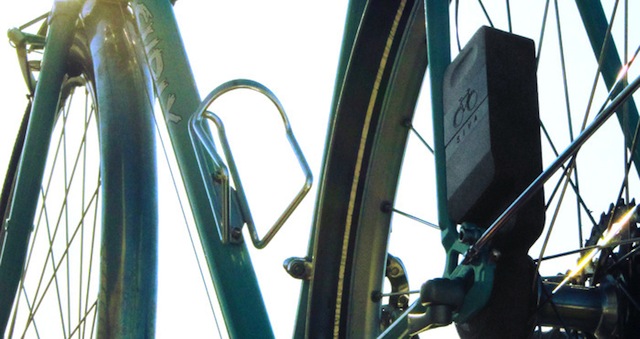 If you’re an urban cyclist, chances are you often find yourself riding home at night after a late class, meeting or other event. If you’re anything like me, this is also the time your iPhone starts to die. However, with the Siva Cycle, a promising new Kickstarter project that charges your iPhone or other USB powered device while you ride, this will be a non-issue.

The Siva Cycle itself attaches to your rear wheel, meaning you have to take off your back Quick Release or set of lug nuts for installation. The device sits next to your rear wheel and uses magnetic line rotors to power a lithium battery pack. The Siva’s battery pack is charged while you ride, however, if you have a tube mounted pack or something similar, you can have the Siva Cycle charge your iPhone or other device directly while you ride. This will be nice for those late night commutes and Critical Mass rides.

For the bike geeks out there, the Siva Cycle weighs a mere 300g, so you’re unlikely to notice any weight change during your ride. The device is also weather resistant, so commuting in the rain and snow won’t kill your Siva Cycle. All power output is regulated so that the device can only push 4.5w of electricity, ensuring that your iPhone is safe from overpowering. The battery has a capacity of 1300 mAh (70% of an iPhone 5’s battery) and a 500 mA charge rate, so the Siva Cycle will charge your mobile device as fast as any standard USB 2.0 port.

If you’d like to preorder a Siva Cycle for your bicycle, expect to pledge $95 on Kickstarter. We should see these devices ship out around November with a final retail price of $105.00. The company is currently seeking $85,000 to put the Siva Cycle into mass production.