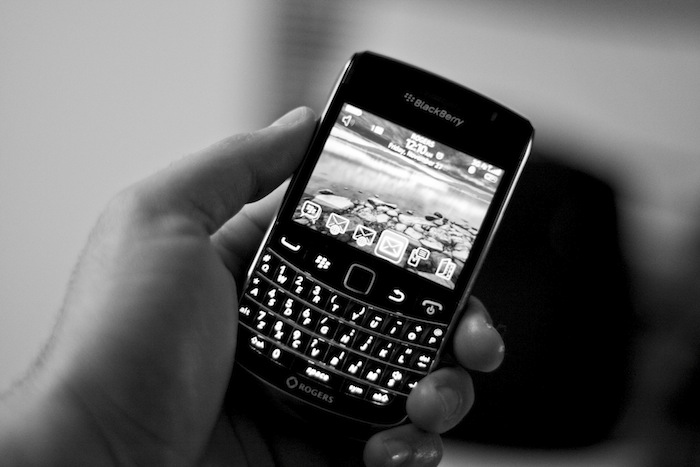 By now I’m sure everyone has had a chance to digest the big news from Wednesday — yes Blackberry announced the new Z30.

This is how dysfunctional Blackberry is at this point, either they didn’t know about the release of iOS 7 or they thought their announcement would be heard through the deluge of Apple news.

It’s pretty clear by now, Blackberry is on the ropes and fading fast. Reports suggest they could be split up and sold in parts and that up to 40 percent of the workforce could be let go in a matter of days.

Their products aren’t selling, their new OS arrived four years too late and even their patent portfolio is fading in value. Things are not looking good in Waterloo (insert Napoleon pun here).

The story of how Blackberry reached this point is fairly well-known. Not only did they whiff on the touchscreen smartphone trend, and completely underestimate Apple, they didn’t even believe the iPhone was physically possible when it was unveiled in 2007. Like a piece of alien technology unearthed from the desert, BlackBerry executives held an emergency meeting in which it was determined that the iPhone was witchcraft.

Like the moon landing, Apple had faked an iconic moment and pulled the wool over everyone’s eyes.

Of course we all know how that ended, Steve Jobs personally reverse-engineered the alien technology by hacking the giant alien ship and…uhhh wait, that’s Independence Day.

I’m a proud Canadian, I mainline maple syrup, know how to build an igloo and have a closet full of lumberjack shirts. I support Canadian companies whenever I reasonably can, but I’m here to tell Canada that Blackberry’s failure is at least partially your fault.

In Canada, we have a tendency to prop up inferior companies and products merely out of a misguided sense of patriotism. In 1976 that might have worked, back when the Internet was the space between the mesh of a hockey goal and free trade was a stick of gum from a pack of O-Pee-Chees for a Popeye’s candy cigarette. In today’s world a product has to compete globally, and stand up to fierce competition in order to succeed.

If I had a loonie for every time someone asked me why I didn’t support a Canadian company by buying a Blackberry I’d have enough for a nice beaver pelt Chesterfield.

“You have to support a Canadian company,” they would say.

“I need a physical keyboard,” they would argue.

The thing about the market is that it solves all arguments about what is or isn’t desired in a product. The complete dearth of QWERTY phones left shows that the demand simply isn’t there. While Blackberry was once at the top of the world technologically, they committed the cardinal sin of of business — they rested on their laurels and didn’t anticipate the next wave.

Remember when it was a big deal that U.S. presidents were using Blackberrys? Wasn’t it great when TV shows like The West Wing glamourized the device as an icon of power? Ya that was more than five years ago.

However, in Canada, Blackberry still has above average market share merely because a lot of people think they are doing the company a favour by pity-buying their products.

My credo when it comes to buying local is as follows; I will buy a Canadian product if it is better, or even just as good as, a competing product. It’s a tie goes to the runner type of situation.

In 2013, Canadians do their native brands no favours by handing out charity. Propping up Canadian companies only serves to lengthen their lazy demise, numb them to the changing dynamics of the broader market and provide all their users with a worse product in the process.

If Blackberry had seen their market share on home turf eroding at the same rate as the rest of the modern world might they have changed course sooner? We’ll never know. However, it is easy to see how being the toast of the town on Bay Street in Toronto might weaken your feel for how the market is moving under your feet.

It’s a kind of logic I apply to all things I value and enjoy —you do them no favours by not helping them address their issues. Whether it’s sports, music, technology or politics, being a cheerleader doesn’t help in times of crisis. Sometimes you have to have an intervention and let the issues come to the surface. If you know your brother has a meth addiction, you don’t lend him money for cigarettes.

Even now, word is that the Canadian government is going to be very hands-on with a potential Blackberry sale, citing “national interest”. As is the case with most things, leaving such decisions up to the market will inevitably result in a better outcome. Putting restrictions on a possible Blackberry sale only diminishes the value the company can fetch resulting in less money for shareholders, many of whom are large Canadian pension funds.

In a global world, protectionism may work for a little while, it might even save a few jobs in the short term, but in the long term it does Canada or it’s workers any good to reward poor products or service.

The same dynamic is being played out in the recent rumours of Verizon’s entry into Canada and the arrival of American retailers like Target, Nordstom and Saks Fifth Avenue — inferior Canadian competition crying for help and government protection and playing the maple leaf card. If Hudson’s Bay or Bell want my business, they had better do more than just smother themselves in maple syrup.

At the end of the day, Canada is better served by holding our companies to the same standard as the rest of the world, because that’s who they compete with.

The fact is that Canadian companies can compete if they are given the right market conditions and are allowed to sharpen their skills against the best the world has to offer. Anything less is like drinking American beer, a recipe for watered down and weak products.

Canadians may direct their polite apology letters to [email protected]